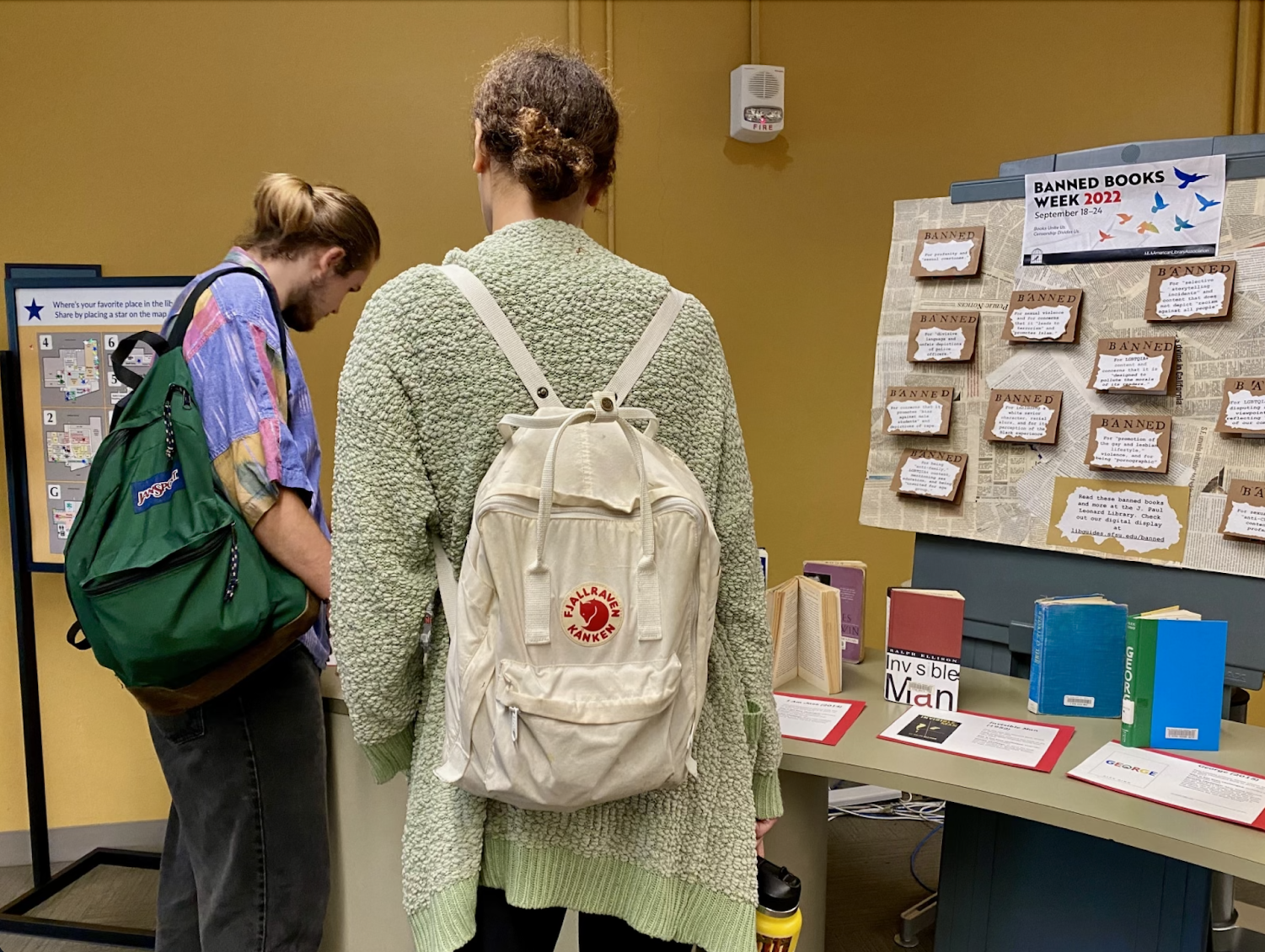 Coordinator for Banned Books Week Betsy Gomez said this is the most censorship they’ve seen in the 40 years that the event has existed.

SF State commemorated the 40 year anniversary of Banned Books Week by showcasing books that were sought to be banned this year on the first floor of the J. Paul Leonard Library.

The week is meant to bring awareness to the dangers of censorship.

Banned Books Week was founded in 1982 due to a sudden surge of sensitive book bans in schools and libraries.

“There tend to be certain themes that come up a lot,” said SF State Senior Assistant Librarian Melanie Smith.“Books that are sexually explicit, books that talk about LGBTQIA topics, topics around race, that are around kind of sexuality and gender.”

This year’s theme of the weeklong event is, “Books Unite Us. Censorship Divides Us.”

“I think this year, it’s more important than ever that people have an awareness that there are people who are trying to keep other people from reading certain books,” said SF State Librarian Deborah Masters.

“Sometimes, even if a book is distressing, or disturbing or upsetting, that’s a really interesting learning experience too,” Smith said.“It’s an opportunity to have conversations that are meaningful and valuable within the family, within the community.’’

According to Unite Against Book Bans, an initiative of the American Library Association, there were 681 attempts to restrict or ban books from Jan. 1 to Aug 31. of this year.

“What we’re seeing now is by far the most censorship we’ve seen in the 40 years that we’ve been doing this event and books we’ve started as an advocacy campaign to inform people about censorship, the books that are being targeted, and what people can do to defend them,” said Coordinator for Banned Books Week Betsy Gomez.

According to Gomez, this week highlights what students can do to prevent censorship.

“The students are actually one of the most effective tools in this fight… student voices have been so profoundly impactful in preventing censorship,’’ Gomez said. “I want to encourage students to speak up today to say, ‘hey, it’s not cool to remove these books.’’

Smith said that libraries tend to stand for the free flow of information.

Journalists, teachers, book sellers and others also worked to bring awareness to the issue.

Fandom Forward, a non-profit group that uses the power of story and popular culture to make activism accessible and sustainable, has challenged the public to do a task every day in support of Banned Books Week.

In addition to visiting the library, students can learn more about banned books from the library’s guide and the American Library Association.

Leave a Comment
About the Contributors
Jensen Giesick, Staff Reporter
Jensen Giesick (she/her) is a reporter for the Golden Gate Xpress. She's majoring in journalism and minoring in holistic health. Jensen was born in Bakersfield, California but resides in San Francisco. She interned at Embarcadero Publishing this past summer writing a variety of different articles. In her free time, she enjoys traveling, spending time with friends and family and playing with her new puppy, Dixie.