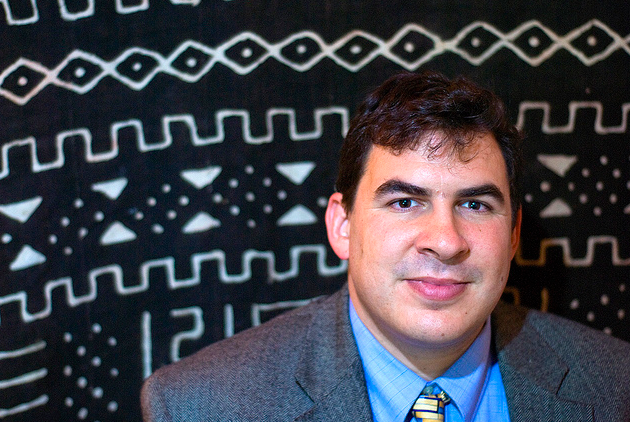 It’s 1876 and the courtroom in the Gold Coast of West Africa is small. The jurors are restless as they listen to a young woman named Abina Mansah desperately trying to convince them that she was, in fact, a slave in an otherwise free British colony.

The jury members are men who range from merchants to palm oil plantation owners, men who know what the consequences are of believing this woman’s story and convicting a man of purchasing and owning slaves. A judge sits uncomfortably, balancing justice with the economic demands of the community.

This is one of the key scenes in a new graphic novel detailing the realities of the West African slave trade through the eyes of a slave woman written by SF State history professor Trevor Getz. The novel is meant to be a textbook.

An unorthodox format for a textbook, Getz believed this was the best format to tell Albina’s story. He was determined to stick with the style in order to provide the reader with a more powerful historical account of a court case that has been omitted in texts on African history.

“It’s a lot more intensive to do a graphic novel,” Getz said. “There are a lot of things that go in to it, things that you could otherwise ignore.”

Getz also chose the style in order to bring a visual context to a world viewers may not be familiar with.

“Right from the start it sounded like a project with a lot of potential and a story that I’d like to help tell,” said artist Liz Clarke.

Clarke, a freelance illustrator based in Cape Town, South Africa, was chosen from 36 applicants and landed the unique opportunity to provide her artistic talents in an educational setting. She had only worked with fantasy and science fiction illustration before.

Despite her background, Clarke was able to work with Getz to make sure that each frame was historically accurate.

From Abina’s appearance to the age of the rest of the cast of characters, Clarke and Getz worked closely to ensure that their interpretation of Abina’s story was as accurate as possible.

“I had the luxury of time for quite a lot of research, asking Trevor questions, reading up on architectural styles and building materials, finding images of historical and contemporary Ghana,” Clarke said.

Partnered with the graphic history is the actual court transcript, followed by a discussion on the book, how to use the book in the classroom and a timeline with important dates leading up to and after Abina’s court case.

Although not officially used as a teaching textbook at SF State yet, some students believe there are advantages to its presentation style.

“I do believe that teaching the complexities of the African slave trade through a graphic novel is effective because it provides visual context that can be lacking in a just plain words book,” said Eric Cavazos-Smith, a double major in cinema and electrical engineering. “I mean, if they can teach calculus with Manga-style textbooks, why can’t we do history?”

Getz admits that aside from the unusual format for a textbook, which three other publishers turned down, the novel is also “subversive because it reveals so much.”

The book opens with a slight disclaimer, allowing the readers to know that the graphic history is one person’s interpretation of the event that follows.

“When you have somebody who was totally silenced in history, either you don’t tell her story or you speculate,” Getz said.

Some students, though, believe that this type of book may not be the most effective for all learning styles.

“If a textbook is effective or not depends on how the student reacts to it because, although pictures may add context, too much illustration can be more of a distraction,” said Berta Pibernat, freshman cinema major. “If a student can get the main idea of the reading then that’s great, but if a student only remembers the color of the clothing or the background, then isn’t that counterproductive?”

Overall, Getz hopes that readers will actively participate in the discussion that the graphic history brings up. From his interpretation of Abina’s case to supplying the reader with factual details in the latter parts of the novel, Getz believes it gives the reader a chance create a dialogue of what went on in that courtroom and during that time period.

“Nothing would make me happier than someone contesting my interpretation,” Getz said with a smile.