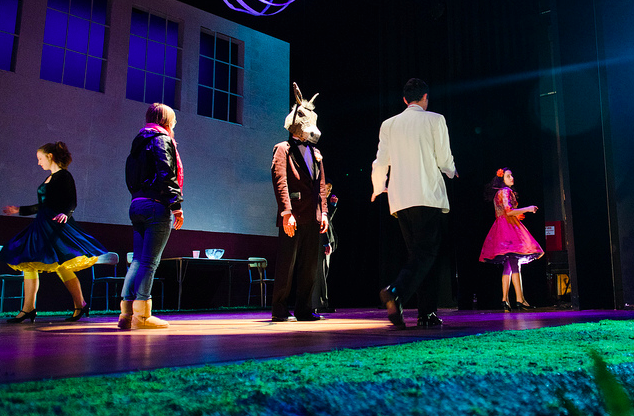 What happens when the magic from the forest of “A Midsummer Night’s Dream” with the shyness and the charm of the 1950s are mixed? Well, other than a very eloquent malted shake order, the two create the innovative SF State theatrical creation “Wallflower.”

“Wallflower” is a devised theatrical piece led by guest artist, director and adjunct professor Mark Jackson. Devised work, Jackson said, refers to the process in which no script is provided, but designers, actors and the director collaboratively create an outline, choreography and lyrics for the entire piece by just doing it.

Nicole Mischke, a junior and dance major, said she loved being able to work with others in order to make something beautiful.

“It’s a really cool experience with everyone working together and creating something,” Mischke said. “My favorite part is working with all these people because I’ve never made friends like this and everyone is so talented.”

Gabby Battista, a junior and theater major who has been involved in several SF State theatrical productions, said the process was far different because everyone played an intricate role.

“It feels good to give my ideas and have them be used because it gets me really geared up to give them,” Battista said. “Sometimes I feel I put too many ideas or I’m a loud mouth, and it’s definitely a struggle to know when to put ideas out there or be patient, but you have to give and take with both.”

Mark Jackson said that, while the piece itself is beautiful and unique, there’s nothing like the process and what it offers to all involved – crew, actors and audience alike.

“Actors have to think like playwrights, designers like actors, and hang egos at the door,” Jackson said. “The differences between them make it so touching when they come together and create something.”

Set in the theme of the American 1950s, but in a place outside of time, Jackson said that the characters exist not in a setting but rather in a feeling and a magical place that allows them to be. Jackson said the title “Wallflower” refers to a big theme of the show: the ability to express openness and break down walls.

“It’s about shyness and fear, in particular our desire to confront those things we fear by putting ourselves out there,” Jackson said. “It’s a theme and a feeling everyone can relate to because shyness to open up and be vulnerable is a universal theme.”

The piece’s dreamlike sense of fantasy mixed with the alluring lessons of reality creates an environment that leads the audience and allows them to lose themselves in its energy. Jackson said it is particularly effective in the hands of students because of the emotions “Wallflower” portrays.

“Teenagers put on a mask to hide a volcano, an atomic bomb of emotions within them,” Jackson said. “The 50s were the American teenage age and it had that mask that everything was going great.”

Battista said many times during the creation of “Wallflower” she had to be emotionally and physically vulnerable because in the end she was attempting to create the piece naturally and wholly.

“It’s not easy to put yourself out there but we’re all on the same page,” Battista said. “You don’t need to be afraid to express yourself because in the end you’ll feel successful.”

“Wallflower” runs through Oct. 23 in SF State’s Little Theater. Tickets can be purchased online through the creative arts department website.