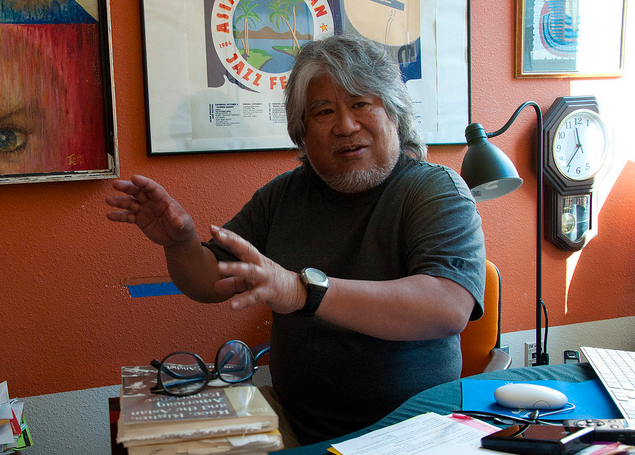 He can overwhelm your brain with endless amounts of information, but he would probably rather tell you a good joke straight from his unfiltered, fast-talking mouth.

Asian American studies Associate Professor Daniel P. Gonzales, who teaches Asian American and American Ideals and Institutions as well as Pilipinos in America: Problems of Transition, is currently awaiting the approval from SF State President Robert A. Corrigan for his promotion to full professor.

He said there are no plans to slow down after he came to SF State almost 43 years ago.

“I was at a crossroads at that time,” Gonzales said. “I was making decent money at a good job, but I didn’t want to be someone who was stuck at a job they didn’t like for 20 to 30 years, and now I’m here.”

Gonzales said he came to SF State at the outset of the 1968 student-led strike, which fought for the establishment of the College of Ethnic Studies, the first of its kind to concentrate its curriculum on the history, culture and struggles of ethnic minorities. The strike, led by the Black Student Union and the Third World Liberation Front, lasted for five months and is still known as the longest campus strike in United States history.

“I’m all for the protesting and picketing, but I’m not a front line picketer so I’m not going to go out of my way to get arrested man,” Gonzales said. “Some protestors today that resort to violence are just giving the ability to the police, to shut them down.”

Gonzales said he likes to write creatively, but sparingly, work on music when he gets time to, and take pictures as a hobby. He spent a lot of time at the Kearny Street Workshop, the nation’s oldest Asian Pacific American multi-disciplinary arts organization, where he has gotten to know many brilliant minds and artists from the Bay Area.

“These people, such as the poets and writers, they were the most influential in constructing the Asian American studies experience because they lived it,” Gonzales said. “Now, I liked writing and doing all that other stuff, but these people were better than me at everything, so what are you going to do. My stuff took a backseat to theirs.”

Alex Fabros, who is Gonzales’s newly-discovered cousin, said Gonzales has a good heart and he loves to teach. There is no one better to teach Filipino history or Asian American struggles in the community. He’s a good mentor and he goes out his way to write recommendation letters for students who want to attend grad school and pushes them to be better, Fabros said.

“Other professors may skim the top of the water, but Dan will go below the surface of the water and discover facts you didn’t know about,” Fabros said. “He is an important individual in the community and he has set the standard for research now.”

Richmond Gali, 21, kinesiology major, said it was a really cool experience to be in professor Gonzales’s class.

“He was very informative about Filipino history and his sense of humor is a huge icebreaker, especially when the class gets quiet,” he said.

Gonzales said some of his biggest achievements were serving on the academic senate in 1978 and establishing the curriculum for ethnic studies, as well as helping put together a collection of stories from the founding members and current members of Asian American studies.

Gonzales said he’s able to teach this long because he is always playing catch up, but the students are not much different from when he taught years ago; they still don’t like to read.

“Attribute my stubbornness, wonderful spouse and strong friendships to some of the reasons I keep teaching,” Gonzales said. “I have a love of learning and a fear of what will happen if those of us who understand some of the real problems of the world stop teaching about them.”