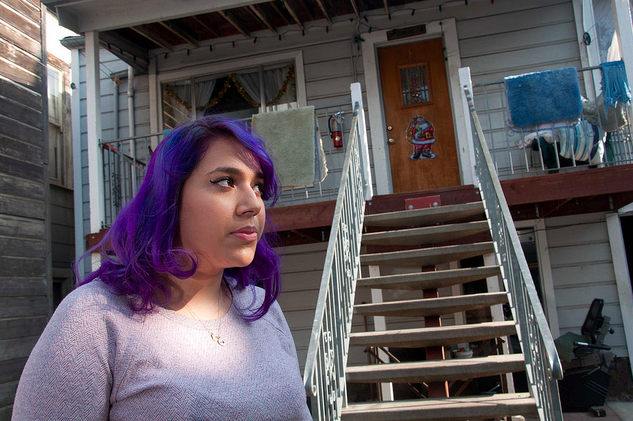 Carolina Portella, a 20-year-old student at the Academy of Art University, moved from Palo Alto into what seemed like a perfect situation: a cheap room in the Mission district with her friends. However, she quickly found that the situation with her landlord left a lot to be desired.

Her landlord starts making loud noises on the property at 4 a.m. and by 8 a.m. is blasting loud music in the driveway and harassing people passing by the house. Portella and her roommates often feel trapped in their apartment like they have to hide from him because it is easier than dealing with him.

“When I first moved in, he stalked me,” Portella said. “When I would wake up and turn on my room light he’d start knocking on my window and I’d have to go hide in the bathroom. Luckily this stopped because my roommate’s mom called his mom and told her he was scaring us.”

Sometimes it involves more than just dealing with the landlord. He often brings friends over, and then forces Portella and her roommates into uncomfortable situations with them.

“Often in the late afternoon he brings his creepy friends over. He’s in his late 40s, and usually grossly tries to set them up with my roommate,” Portella said.

Her landlord has restricted guests from coming over after 10 p.m. and once called a friend she had over a “fucking idiot” because he hadn’t seen a Tom Selleck movie.

“When you have a landlord and tenant situation, you’re going to have problems,” said Tommi Avicolli Mecca, the director of counseling for the Housing Rights Committee of San Francisco, who recommends that renters make sure that they are protected under rent control and just cause protections before they move in.

“It’s like any other relationship,” said Larry Sokoloff, a tenant attorney in Santa Clara. “Do you feel comfortable with this person? Does it seem too good to be true?” Sokoloff proposes that people looking for apartments bring a second pair of ears with them to get a second opinion.

Many students look for housing under a strict time constraint, but it is important to take the time to do research on the potential landlord. If you find yourself living in a place with a bad landlord, there are always options. San Francisco tenants have more legal protection than many other cities, and it is possible to find out who they are through the Housing Rights Committee of San Francisco. Also, Sokoloff recommends forming groups to make a stronger point.

“If something isn’t up to code, as an inspector, I’d say if there is a problem that forces you to move, perhaps form a tenants union,” Sokoloff said.