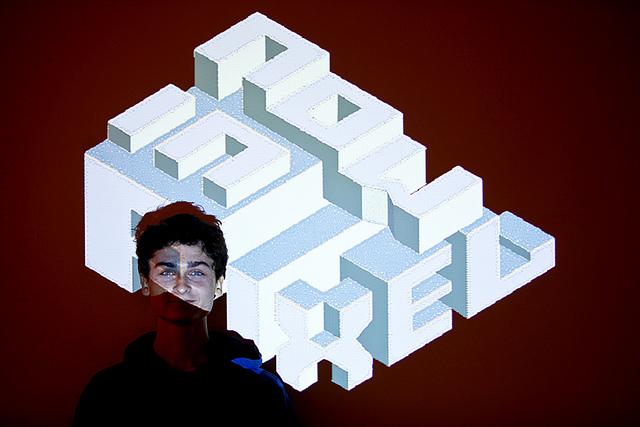 Seeing pixels in video games or in art seems to have become a thing of the past. Artists and designers are always doing what they can to create the cleanest lines and the most realistic video games.

However, the “Now in Pixel” art exhibit featured on campus is throwing attendees back to a time when pixels were the newest technology. From a totem poll that looks like it was made from an old-school video game to grainy photographs and pixel paintings, nine artists are taking viewers back in time.

The exhibit, which started Oct. 6 and runs through Friday in the Martin Wong Gallery on the second floor of the Creative Arts building, features art in a variety of forms. The gallery highlights the work of two photographers, as well as the work of several painters and artists who work with digital media. All are SF State students.

Although the artists have united in the creation of pixel art, the inspiration for the art is extremely different.

“It’s something everyone can relate to in a sense,” said Nicole Wolfram, an art history major and curator of the event. “It brings people back to their childhood.”

Micaela Rodriguez, a 21-year-old art education graduate student, faced a lot of challenges with her art piece, a painting of the human figure in pixels. Although it is a two-dimensional piece, she was able to give the picture movement by scattering the pixels and the figure across the canvas.

Donald Hanson, 21, a visual communication major, said he doesn’t quite know what he is getting into when he starts a project.

“I work with manipulation of photos and the final product isn’t known,” Hanson said.

Hanson describes his art as symmetrical and often he uses several mirror images. He was approached by Wolfram to participate in the show and also create the show’s logo.

Brent Nunez, a 21-year-old art major with an emphasis in photography and sculpture, pulled his influence from photographs he already had, but also took new photos for the exhibit specifically.

“I wanted to place people in familiar places,” said Nunez about the photos he took. “It’s interesting because photography already has pixels incorporated.”

Although Hanada Shagour has participated in art shows since high school, this one stands out for her the most. The 22-year-old art major thought that the show was a cool concept and submitted art to the show.

“I love charcoal and I love portraits,” said Shagour about the charcoal portrait she submitted to the exhibit.

Wolfram was inspired to curate the event by the people in her life.

“I was very influenced by my husband, who’s a big gamer,” she said. “I think students will find it interesting.”

And so far students are enjoying the exhibit.

“It’s very interesting how pixeling is in when five years ago it was considered tacky,” said Selina Chavez who is getting her master’s degree in art education.

The next show in the gallery will be a Dia De Los Muertos exhibit starting Oct. 24, which is now calling for artistic submissions.