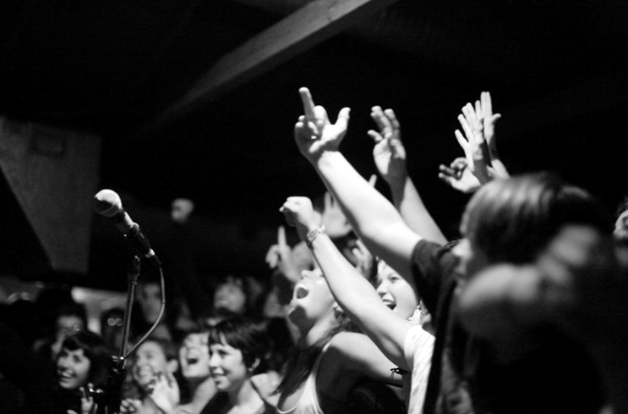 Organizing a concert is no easy business – especially for a student. There are time constraints, money problems, fussy public relations people and way too many venues to get banned from.

On the other hand, putting a show together can be very profitable. National tours and massive multi-day festivals have become the bedrock of the music industry, trumping music and T-shirt sales.

But for a few SF State students producing concerts around the city, whether in bars or living rooms, none of those things really matter.

“These shows make me feel like I have so much for purpose in the world. When I work so hard to put these shows together and I see everyone there it just makes my world complete,” said Stephanie Escoto, the assistant manager at The Depot on campus who also co-founded a concert production company called Lone Wolves.

Escoto teamed up with The Depot manager and fellow SF State student Gio Acosta in starting the company. Last month they had their first Lone Wolves show at a house in the Sunset, but have been putting together shows in the Cesar Chavez Student Center for a few semesters now.

The two teamed up and turned to booking outside of campus for more independence in the process. There is no need to worry about if a flier is too inappropriate or if a band will offend the administration. Not having the school’s venue, funding or designating technical support creates other obstacles, but they’re not bitter ones.

“I know this is experience and I know we’re succeeding at it, and it just fills something in me,” Acosta said. “We’re not really going for the glory of putting these things together. It’s more of a high-five that we did it.”

Acosta and Escoto are still working on building the Lone Wolves brand, which includes a lot of emails and networking. They say it’s all about building a positive reputation and having a name people can come back to for quality experiences.

Another SF State student, Scott Sanders, knows all about this.

“You want to create an environment that people are really excited to come back to,” Sanders said.

The communications and marketing major has been managing Spirit Animal Productions for about three years with a friend who lives in Los Angeles. He started putting together events in a suburban San Diego coffee house while in high school, but has moved on to booking indie giants like Japanther and Kimya Dawson all along the coast.

These days Sanders does see a profit from his shows, but shrugs off the mention of it. For him it’s not so much a business, but more of a “creative engine.” That feeling of togetherness that comes with being in a crowd at a concert is enough for him, and the name Spirit Animal is meant to reflect this.

“When everybody’s so excited to see this band, or to hear that song that has meant so much to them, it’s just this overwhelming presence and connection you have with everyone,” Sanders said. “It’s like you’re on a different plane of existence than when you’re just hanging out with your friends. You feel that massive presence there, like a spirit animal.”

Sanders thrives on facilitating people in expressing themselves, and eventually would like to open a community center stocked with paints, instruments and cameras where people can gather and create. And by night, it will transform into a full-on venue.

“The best part of all this for me is just sitting behind the stage and watching kids absolutely lose their mind. And it’s not because of us, it’s because of this band which means so much them,” Sanders said. “I want to bring that experience to people my entire life.”