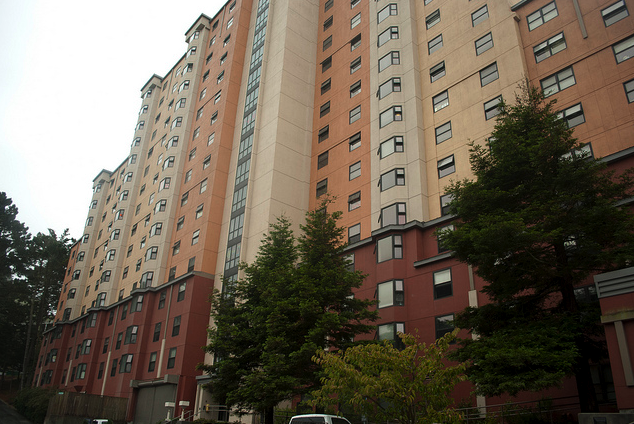 Many SF State students were shocked to hear about the sexual assault that occurred in the Towers at Centennial Square dormitories between 5-8 p.m Friday, Sept. 30.

According to University police, an unidentified woman, who was not an SF State student, was lured into the building’s elevator by a man who said he knew of the party she was going to attend in the dorms and was going to take her there. The woman told police that the suspect took her to an unknown floor and room and proceeded to sexually assault her.

The subject is described by University police as being between 18 and 22 years old, about 5 feet 8 inches, of mixed race and with short hair.

Most students heard of the assault from fliers posted around campus dormitories.

“I’m shocked,” said Rebecca Corona who has lived in the Towers for the last year. “I feel extremely safe (on campus).”

What may come as a surprise is the comparable recent crimes that have occurred on campus. While petty theft and vandalism are the most common criminal acts, within the last two weeks police have also investigated a sexual battery case and a report of a stalker.

The sexual battery case was closed when police responded to the fight that also occurred at The Towers where they arrested a suspect, according to the University police crime log.

The incident involving a stalker was closed at the scene after police took a report Saturday, Oct. 1 from Stevy Shadwick, who said a man chased her home. Shadwick, who lives in the Village at Centennial Square, said the man was someone she had met before, but he followed her home on Muni after she repeatedly asked to be left alone.

“I was, like, running through campus on the phone with my roommate,” Shadwick said. “He was a creep. When he actually followed me back to my building I called the (University) police.”

Shadwick said she used to feel relatively safe on campus and consistently saw campus police “hanging around,” but now she is more aware of her surroundings.

According to the annual Campus Security and Fire Report, which was published in late September, there were a total of three sex offenses on campus last year.

University spokeswoman Ellen Griffin stressed the importance of students learning how to prevent sexual assaults by staying aware of surroundings and avoiding use of excessive alcohol, as it interferes with clear thinking.

“Campus police are investigating and have increased patrol,” Griffin said.

Other students who heard of the sexual assault Friday night are not feeling safe. Brian Farmer, a resident of The Towers, said that the possibility that a fellow resident could have committed the assault is frightening.

“It’s scary knowing someone in the building might’ve (done it),” Farmer said. “They should put video cameras, at least in elevators. There’s, like, none now.”

Although the news of the assault did alarm many students, most did not share Farmer’s concern.

They believe the security is substantial, as identification cards or keys are required to enter most buildings.

A brochure called “Preventing Sexual Assault” can be found on the campus police website. Any information regarding the sexual assault should be reported to campus police immediately, according to University police.