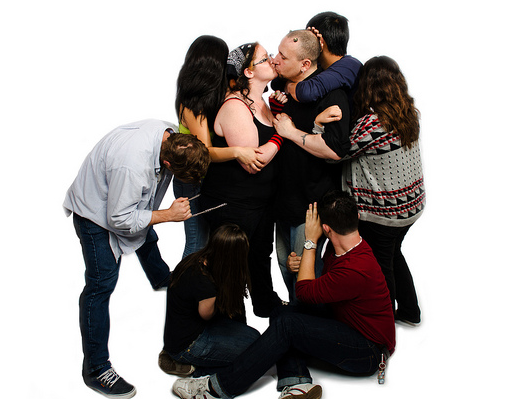 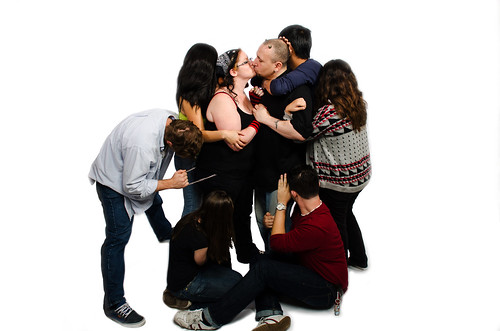 SF State student Emily Irving and her boyfriend Phil Russo pose for a portrait. They are in a polyamorous relationship and often date separately, though at times share a partner between them. Photo by Nick Moone.

Most people won’t declare “Just so you know, I’m not monogamous,” as SF State senior Emily Irving, 21, does.

Irving is in a polyamorous relationship with Philip Russo, 36, who introduced her to the lifestyle. They have been together for three years.

Polyamory, a relationship that involves open and multiple partners, is an alternative to monogamy.

“I really liked him and I thought that, maybe if I didn’t understand the idea of it at first, a few dates couldn’t hurt me,” Irving said. “I went out with him and we talked about it more and I really liked the idea of being that unrestricted and un-smothered in a relationship.”

Irving then entered a serious relationship with Russo, who at the time was already seeing two other women. She then began living with Russo and one of the women, which she described as a challenge.

“It was all about balancing time and making sure that I got to sleep in Emily’s bed two times a week and negotiating things with Terry so that she didn’t feel left out,” Russo said.

The relationships not only depend heavily on juggling schedules, but also largely on trust.

“It’s very much about trust. It’s not like monogamy where I trust you not to go falling in love and sleeping with other people,” Irving said. “But that I trust you to be an individual and do whatever you like to do because I know you trust me just the same.”

One misconception is that polygamy is the same as polyamory.

Irving feels that polyamory is the opposite of cheating because her relationship with Russo is open and honest. If she feels attracted to someone or feels jealous, she will tell Russo.

“The main point is that it’s not so much about sex but it’s about falling in love with people. In monogamy, you can’t tell someone if you’re attracted to someone because that’s not what you’re supposed to do,” Russo said. “We talk about it. Polyamory is about openness, trust and communication.”

Russo and Irving feel that their relationship is as legitimate as a monogamous couple’s.

Russo and Irving plan to move to New York City after she graduates in the spring. They plan to continue their relationship there, where they hope to expand their family with more partners.

In the case that they decide to have children, Irving and Russo will raise the kids with their other partners.

Even then, Irving and Russo are determined to stay who they are. 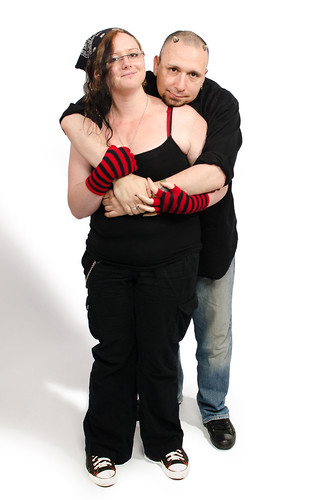 SF State student Emily Irving and her boyfriend Phil Russo pose for a portrait. They are in a polyamorous relationship and often date separately, though at times share a partner between them. Photo by Nick Moone.