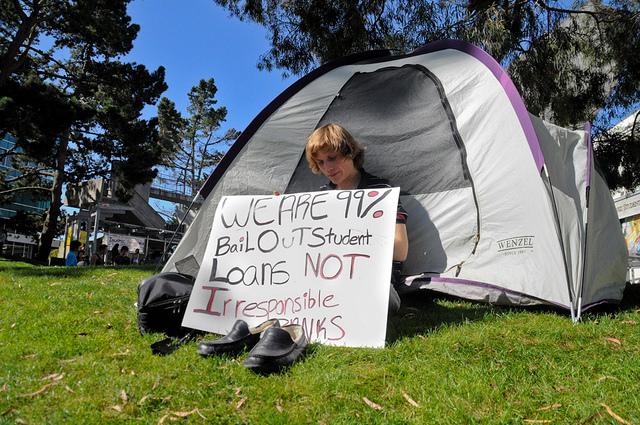 A group of students gathered on the quad this morning with the purpose of camping out over the weekend as part of the Occupy SFSU demonstrations that began yesterday.

International relations student of SF State, Luke Barnesmoore, pitched a tent outside the Cesar Chavez Student Center and invited others to do the same by means of a Facebook event he created.

“I didn’t want to wait until Monday to start,” said Barnesmoore. “I plan to come back every day and stay until the police force me to leave.”

The Occupy SFSU demonstrations, which began in solidarity with Occupy Wall Street and Occupy SF, are intended to bring awareness of the budget cuts and tuition hikes students are facing, said Barnesmoore.

Melissa Hohl, 20-year-old creative writing major, was also there to support the movement and expressed hope that the protest would be allowed to continue.

“Luke is my boyfriend and it was his idea to get more involved,” Hohl said. “If they let us stay then we’ll definitely be able to bring more awareness.”

Joseph Greenwell, Associate Dean of Students, told Barnesmoore that while he supports freedom of speech, setting up a tent on school grounds is against campus policy.

At approximately 3 p.m., campus police approached Barnesmoore and said he would be arrested if he did not take down the tent. Barnesmoore complied with police and left shortly after.

Barnesmoore plans on coming back Monday morning to set up his tent in the front lawn of the Cesar Chavez Student Center.

“Students have something to fight for,” Barnesmoore said. “We’re going to be the people running the country, it’s our future.”