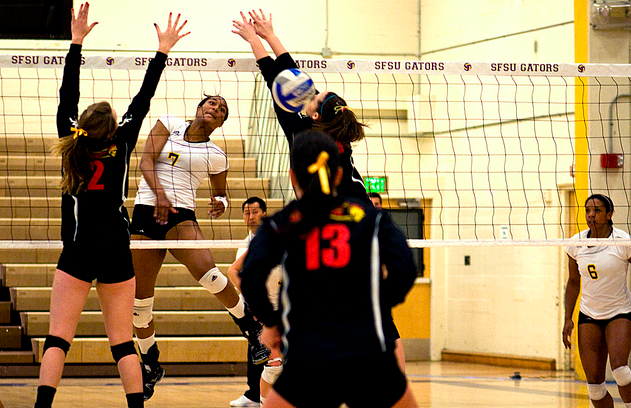 “It felt really good, especially to give us momentum for the game tomorrow,” Jazmine Williams said. Teammate Robyn Hall agreed.

“We have Chico tomorrow so it was important to get this win tonight, (because) Chico’s a strong team. I’m definitely ready now, and I think as a team we’re ready too,” Hall said.

“It was an important match for us. We’ve had three tough teams in a row and so we knew it was going to be a tough little stretch and so it was important to get back and be competitive and do things right away,” she said.

The team has been working on regrouping quickly against offensive and defensive strategies all season and put that work to use tonight in the second set.

“We made a few too many unforced errors at the end” of the first set, Patton said.  “We have to make sure we’re making the little plays that win matches, especially when it’s something that tight. What we can control is how we perform every night. We’re going for the ‘W’s’ and we have a big test tomorrow.”

The players are all ready to face the 15-5 Wildcats again after losing 1-3 in Chico September.

“We’re going to come in with the same energy,” Hall said, adding that she wants to “strive for a higher spot in the ranking.”

There are only three home games left in the regular season, and the team knows that the stakes are raised.

With tonight’s win, and key losses by Cal State East Bay and Cal State Los Angeles, the team moves up to fifth in the CCAA conference standings. Only the top four teams go to the playoffs.

“In the second half, you know what you’re fighting for. We have seven more games left, and right now we need seven ‘W’s’,” Williams said.