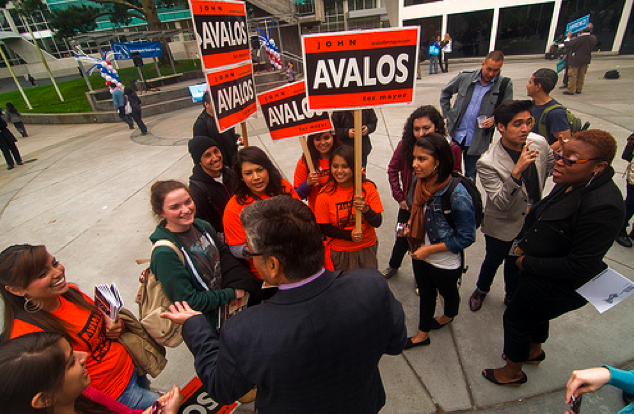 Malcolm X Plaza filled with students as the mayoral candidates took the stage to speak about the goals of their campaigns.

At Thursday’s Mayoral Forum and Voter Registration drive, organized by Associated Students Inc., candidates were given the opportunity to speak to students while ASI and the College Democrats worked to register students to vote. Eleven of the 16 candidates for mayor of San Francisco came to the event and were each given five minutes on stage and two hours to table and interact with students.

Several of the candidates also talked about the importance of more jobs for students after they get out of college and the number of families leaving San Francisco.

Another popular topic that the candidates spoke about was Muni and public transit in the city of San Francisco.

“I am the only candidate that doesn’t own a car,” said current President of the Board of Supervisors David Chiu. “And I am sick of Muni always running 30 minutes late.”

Besides trying to better inform students about the local candidates for mayor, the main goal of the forum was voter registration. A couple candidates mentioned that it didn’t matter who students chose to support in the upcoming election as long as they were engaged in the political process; that was the most important thing.

According to ASI intern Sara Padash, 18, freshman students were very receptive to registering to vote and those who were not registered to vote had mostly recently moved to San Francisco.

“It’s good to see students being exposed to local politics,” said Thierry Louwerse, graduate counseling student. “Obviously a lot of people are unexposed or don’t care. I can’t vote because I’m not a citizen but I’m very interested in the local politics.”

Overall the candidates seemed grateful for the opportunity to address SF State students and try to gain their support. It appeared as though the majority of the students in the crowd already seemed to have their minds made up as to who they were supporting as evident by their signs and apparel in support of their chosen candidates.