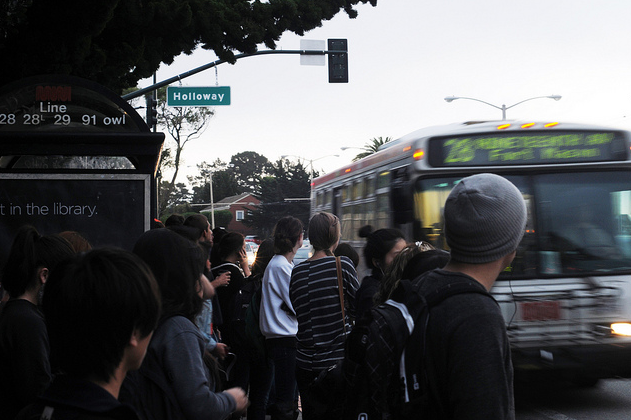 With budgets always being cut, the commute to SF State isn’t getting any easier.  On Oct. 17, a change was made to the frequency of the 28-L, a crucial route for students. The Limited will stop serving the Golden Gate Bridge, but will extend to Fort Mason.

The most notable stop eliminations for the Outbound limited, which is used to commute to SF State, are Park Presidio and Balboa, 19th and Noriega, and 19th and Eucalyptus. This greatly affects students commute to SF State because the frequency of the 28 is already low.

“It’s a pilot project, a test,” said Paul Rose, a spokesman for the San Francisco Municipal Transit Agency. “Every month we audit some of our worst performing lines. We talk to riders and operators to see if there are ways to improve the service. The changes made are reflections on those conversations.”

During peak hours, it’s not uncommon for commuters to see a fully packed 28 bus pass by without stopping.  There is little that people can do as they desperately count down the minutes in their head until they are late for class or work. However, both sides acknowledge the operating reality and the budgetary constraints under which Muni operates.

“I work at SF State and I used to live on 19th Avenue,” said Lane Hollister, formal post-bachelor’s admissions coordinator. “I have to be there very early in the morning so when a fully-packed 28 blows by me while I’m waiting and in a rush it’s not a good thing. The Limited is a great alternative but it’s unreliable at best. Now that they are cutting some stops it’s going to be even harder to make it outbound to campus.  With all the financial problems though, I’m sure they are trying to do their best.”

“The Limited is way better and way faster,” said Serra Naiman, a junior theater major at SF State. “I take it almost every day to go to and from work.  I didn’t even know they cut it. Wow, that really sucks.”

The only thing anyone ca  do is wait and see if the changes will have a positive or negative impact.

“We’re going to see how it works and take it from there,” stated Rose.  “This is going to be an ongoing process.”