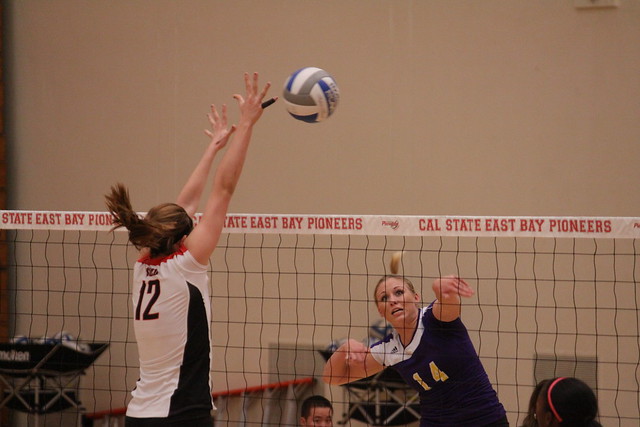 SF State's Megan Johnson (14), spikes the ball during the game against Cal State East Bay on Oct. 28. The Gators lost the away game, 3-2. Photo by Hang Cheng.

“We knew their strengths but we didn’t do what we needed to do,” said head coach Michelle Patton. “We weren’t paying attention to the right stuff.”

It was apparent from the start that this was going to be a different night than Sept. 24, when the Gators swept the Pioneers at home 3-0.

“We got off to a slow start and got our energy back up and then we just couldn’t pull it out in the end, I guess,” said Kelsie Brennan, middle hitter. “It was our errors, mostly. The gym is really big so it’s hard to get the energy up and hear each other. Being in a different gym is really hard. I mean, we’re used to it, so… should’ve done better.”

The team now falls to an 8-9 conference record, 12-10 overall, while the Pioneers improved to 8-8 in the California Collegiate Athletic Association and are now 13-8 overall. This dropped the Gators down to sixth in the conference standings.

“It was really frustrating. They did put up some solid blocks and took my strongest shots away, which is annoying, but I mean that’s what they needed to do, and that’s kind of what we didn’t do,” said Halimah Oswald. “We didn’t stick to our game plan. We knew exactly what they were going to do, just probably like they know what we were going to do, but they stuck in it longer than we did this time.”

The loss comes during a night when Johnson led the team with a season best 24 kills and an incredible five serving aces.

“It was hard, I mean, Megan did step it up and was a huge part of the games we did win. (She had aces) at crucial times, too, it was like when we really needed them… but we need that from the whole team,” Oswald said.

“We didn’t have people to be just committed to winning. Sometimes it was there but sometimes it was like we were half there. It was a great game for Megan. I wish more people could’ve stepped up like she did, myself included,” she said.

Oswald was limited to 10 kills, but still added to the team’s total of 12 aces with three of her own.

Tonight the team is in Seaside, Calif., for a rematch with Cal State Monterey Bay, whom the Gators also swept in September. The Otters have been on a losing trend lately, falling to a 4-12 CCAA record.

As frustrating as the night was, Brennan says she plans to “just sleep it off. It’s a brand new day. We’ve got nothing to lose.”