Older students find a way to fit back into classroom scene 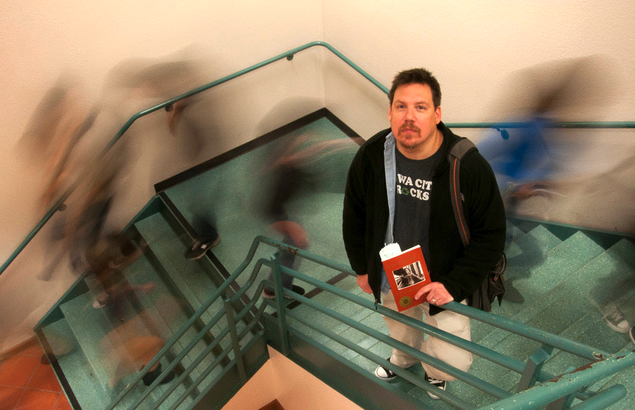 The average educational cycle is thought to be primary school, high school and then straight to college, but for some, returning to college after decades was the best life option.

SF State student Matt Heitland, 40, is transitioning into another round in college after graduating with a master’s degree 13 years ago from Drake University in Iowa. Heitland’s traces of gray hair may not make you mistake him for your grandfather, but he can probably get away with sneaking into the teachers’ lounge.

“I’m not gonna lie, my first time on campus was initially odd,” Heitland said. “It was a different dynamic. Some of these students could potentially be my children. I kept thinking they were saying ‘Hey look at the old guy in the back of the room.'”

According to statistics from the University, the average age of students on campus is 24.3 years old.

Despite the initial awkwardness, Heitland said his overall experience of going back to college has been positive. It was hard for him to relate to other students, but he admitted he was overly conscious of the differences.

Heitland left his management job at a sports memorabilia company in Los Angeles because his wife Rose received a job offer in the Bay Area. After a discussion with his wife, Heitland decided to not look for another job and instead pursue his interest in writing at SF State.

“I always enjoyed reading poetry and dabbled in writing, so I was ready to head back to school,” Heitland said.

Heitland said Rose supported his decision and she was excited for him to go back to school.

“Writing has always been something that Matt has been interested in pursuing so I’m happy that he is getting that opportunity at SF State,” she said.

Heitland isn’t alone in the journey back to school. According to an age study conducted by SF State in 2010, about 2,260 students that were enrolled during the fall semester were age 35 or older.

Lourdes Alarcon, 40, also found her way back to school after getting laid off. Alarcon said she decided to go to school because of the poor job market.

“There is a big job crisis right now,” Alarcon said. “I have two children so I can’t take a job that pays only $9 an hour. I have to get educated so I can find a job that pays good and gives benefits.”

Alarcon started her first year at SF State during the 2011 fall semester. She said the hardest part about going back to school hasn’t been interacting with younger students, but finding her way around campus.

“It was so confusing my first time here,” Alarcon said. “There needs to be more signs that clearly show the names of the buildings.”

Alarcon said the biggest difference for her going to school now is the amount of homework students have to do.

“I have projects overlapping each other and there is so much reading,” Alarcon said. “Nobody can read 60 pages a week.”

The generation gap hasn’t distracted Alarcon as much as she thought it would. She said the younger students today think very maturely.

“They don’t see me as some loser who had to go back to school,” Alarcon said. “They recognize that I’m taking this opportunity to learn and pursue more knowledge.”