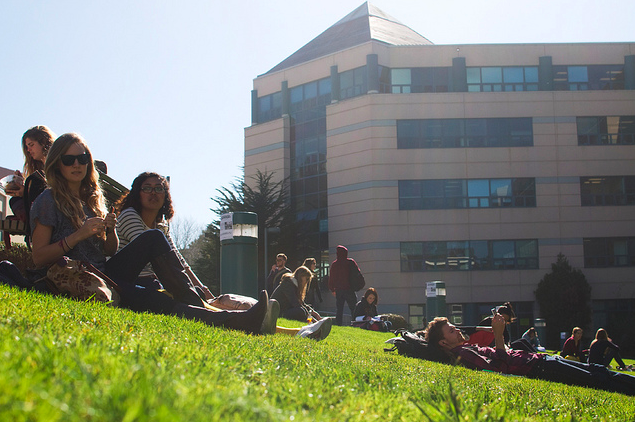 Songs, films and plays have all been written about San Francisco and it’s no secret that people travel from all around the world to visit this Northern California city. It has a reputation for being a beacon of freedom and liberation, having strong historical ties with the 1960s pop counterculture, and features gorgeous landmarks.

SF State junior Mariana Garcia, originally from San Diego, decided to move to San Francisco for all these reasons.

The city has brought her much happiness ever since her earliest San Francisco experiences.

“I went for a walk in the Castro and it was at night and just when I turned the corner and I saw that sign light up. I was excited and that lit up marquee lit up my spirit,” Garcia said. “I knew it was the right place for me. I felt freedom.”

However, this may not apply to all Southern California students.

According to a statement released by Vice President of Student Affairs Penny Saffold and Associate Dean of Students and Director of Leadership, Engagement, Action, Development Joseph Greenwell, the number of Southern California students in the freshman population has increased dramatically in recent years.

“I think it takes a lot of energy to do things here that would be usually easier in Southern California. Like in Southern California everyone drives… whereas here you have to take public transportation,” said SF State senior Thea Sandrich, who is originally from Santa Barbara. “It just takes longer to do things that it becomes a journey. The traveling aspect is something people aren’t used to. You don’t have to be necessarily more thick-skinned, but just not easily as deterred.”

Sandrich, who works as a nanny and lives with three other students, feels that because of these aspects many Southern Californian students move back home.

“A lot of people that I know who went back home, especially the first year, weren’t used to having to work a lot,” Sandrich said. “Or to even look for jobs. Jobs are even harder to find here. The living is definitely hard too. Having to share a room, living in a little apartment, you know.”

According to SF State professor Christopher Sterba, who teaches Biography of a City: San Francisco, quality of life issues may be the real issue as well.

Students tend to live in areas more suburban and farther from downtown such as the Sunset district or in the Ingleside district because of financial struggles; this may be something they may not have expected when first coming to San Francisco, Sterba said.

“You come to San Francisco and you think it’s going to be exciting, artsy, bohemian, open place and in reality you have to live far from it and you have to work hard to stay here,” Sterba said.

San Francisco is culturally looked at as one of the most tolerant cities in the world. Though it is no utopia, it can carry that reputation, according to Sterba.

“You know I had a friend… she was here freshman year and she missed the beach, she missed the weather… A lot of freshman experience it and realize it’s not for them and maybe they should move back,” Garcia said. “I think a lot of students come here because they want to try something new and they experience it and they realize, you know, it’s not for them and they want to go back home.”