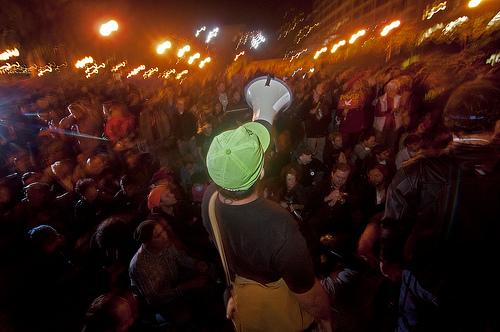 A crowd of as many as 1,000 people gathered at Justin Herman Plaza to join the Occupy SF movement as well as to defend the camp that was allegedly set to be raided by San Francisco Police Department.

Upon hearing of the possible raid, San Francisco mayoral candidates John Avalos, Jeff Adachi, David Chiu and Leland Yee joined the demonstrators in an effort to prevent police action akin to Tuesday night’s Occupy Oakland incidents. Avalos and Adachi proceeded to join the group of protesters and linked arms with them to show their solidarity.

Avalos said that he was going to stay with the protesters and if the police came and tried to raid the lines he would let his body go limp and they would probably arrest him if they began arresting protesters. Adachi also said that he would stay and if anybody got arrested they would become their clients.

Supervisors Chiu and Jane Kim were also present and stayed until a little past 4 a.m., despite Chiu saying that he had to be awake in 3 hours.

Protesters across the Bay at Occupy Oakland were pushing for their own crowd to take BART to Embarcadero station in order to join those at Occupy SF in solidarity. When the group mobilized, BART shut down its 12th Street station in Oakland and Embarcadero station in San Francisco. Rumors continued to circulate that Occupy Oakland was planning to march across the bay bridge so they could join Occupy San Francisco, but that never panned out.

Those not willing to be arrested formed a soft barricade blocking the market street entrance to Justin Herman Plaza and also the back side if the camp as well. Those groups included members with drums and other instruments who were chanting and dancing til the wee hours of the morning and although the crowd thinned as the night wore on, but the music and spirits were still going strong at 4a.m.

While those willing to be arrested  ran drills beginning at 9p.m. to prepare what was constantly referred to by protesters as an immanent police raid. They were constantly moving around the camp and practicing body language and moving as a group to keep the barrier strong and maintain a peaceful attitude.

One of the cited reasons for the possible police raid was that the Health Department had declared Occupy San Francisco a health hazard and made claims of feces, urine and vomit everywhere. Chiu commented after being at the camp for hours that those allegations were clearly false.

According to one member of the camp JD Whitestone who claims to be Hazmat Certified at Racho Cordova, the camp has done everything that they can to comply with the city’s standards and the camp has prepared possible resolutions for other places that the group can camp to help comply but the mayor’s office has been unresponsive.

Demonstrators awaited police for the greater part of the night when word hit at approximately 5 a.m. that the raid was called off. No arrests were made.