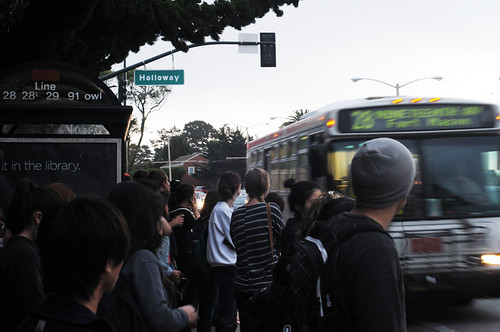 Passengers wait for the 28 MUNI line at Holloway and 19th Avenues, near SF State on Monday, Oct. 24, 2011. Photo by Erik Verduzco.

It’s no surprise to students at SF State that 19th Avenue is just a wee bit chaotic. Between dodging impatient traffic if you’re a pedestrian, coasting on your bike down Holloway into campus or getting on and off any one Muni line, or circling like a shark for a chance at free all-day parking mere feet away from campus, that stretch of highway is as problematic as it is chaotic.

But, that may be changing in the near future with the proposal of the 19th Avenue/State Route 1 Transit Corridor Investment Study.

The study, which is being funded by the California Department of Transportation, the San Francisco County Transportation Authority, Parkmerced and SF State, aims at improving the relentless congestion of this stretch of Highway 1 as well as offer more solutions in ensuring pedestrian safety.

“We know we are not starting from scratch,” Chester Fung, senior transportation planner for the SFCTA.

Fung, who was among several members presenting the study to residents of the greater Parkmerced area last Wednesday night, acknowledged the past proposals on improvements along the highway and reassured the community members present that this study was aimed at serving the residents and their feedback was necessary in seeing this study through.

“Working together we can do something much more holistic,” said Peter Albert, manager of the San Francisco Municipal Transportation Agency’s Urban Planning Initiatives.

Goals of the study that were presented to the small audience in the Towers Conference Center included ways to reduce vehicle, pedestrian and bicyclist conflicts along with clearing up the notorious daily traffic.

Albert explained that all passengers who ride Muni and stop on 19th Avenue or park above in the tucks of residential streets and on Juniperro Serra, “one-hundred percent of pedestrians have to cross the highway. And eighty-eight to ninety percent of them cross to be on the west side of 19th.”

Wendy Bloom, campus planner for the Department of Capital Planning, Design and Construction said that as of the most recent transportation survey through SF State, there is a little more than 12,000 students coming and going daily through use of cars, public transportation and the Daly City shuttle.

With this many bodies coming and going, the traffic on 19th Avenue is not limited to the paved streets of highway but the sidewalks as well. However, that just takes into account the bodies of students, faculty and staff while there are other factors such as the residents of the immediate area and those who shop at the Stonestown Galleria and the hundreds of vehicles daily who utilize the entry and exit points of I-280.

One of the proposals offered in the study is a re-routing of the Muni Metro’s M-line. The study is currently looking at moving the M-line west of 19th Avenue so that it would free up space to vehicles on the highway and also offer residents in Parkmerced access to a line that connects with BART. Along with the maneuvering of the M-line, the possible idea of the metro being stretched out to the Daly City BART station is also in talks with the city, county, state and BART agencies.

The additional space would also allow a new solution to the issues of pedestrian safety and make pedestrian access more intuitive, Albert said.

Although the study has the support of many followers, it is still in the early stages of development and will continue holding meetings open to the public. The next meeting is set to be in December.