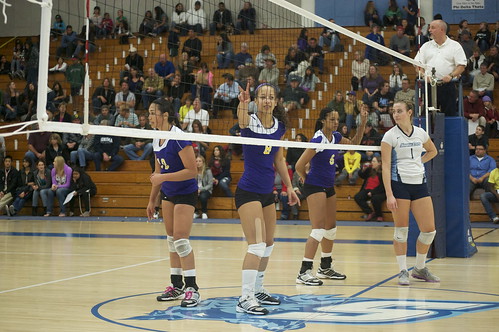 Volleyball players Iris Tolenada, Halimah Oswald, and Robyn Hall, left to right, prepare to defend against Sonoma State, Nov. 11, 2011. The Gators were swept in three sets in the penultimate game of the 2011 season. Photo by Jamie Wells.

The Gators couldn’t prevent history from repeating itself as the University’s volleyball team surrendered a 3-0 sweep to nationally-ranked #23 Sonoma State Friday night in Rohnert Park, Calif.

“We started out doing what we needed to do (but) they stuck in it way longer than we did,” said middle hitter Halimah Oswald. “It was one of those times where it was kind of like we know we can do better, but we just weren’t pulling it out at the time.”

There was little the Gators could do right against the second-place Seawolves, hitting just .078 as a team, while Sonoma hit .290 as a whole.

The Seawolves, however, made nine serving errors, but the Gators failed to capitalize in those key situations and also committed six faulty serves.

“They’re a really good team, we knew that coming in,” said middle hitter Robyn Hall. “I felt like, we were right there with them like for two of the games, and then we kind of let them get runs, and we kind of just let them have it. We were feeling the pressure.”

The Gators weren’t able to stay focused during the many long rallies of the game.

“It’s tiring but the worst part about losing those long rallies. It takes a lot of momentum out of us,” Oswald said.

“The rallies went really long. It was kind of all over the place,” Hall said. “It was definitely a lot of quick touches, very unorganized. Disoriented, kind of. I don’t think we pulled out any of those.”

“We definitely could have stayed on task. We could have blocked better. Their outsides, definitely, they got a lot of free swings,” Oswald said. “We needed to get more kills. We know how to do it and we should have done it better.”

Sonoma improved to a 17-4 California Collegiate Athletic Association record while the Gators fall back under the even mark at 10-11 in conference play.

“They’re a really good defensive team, and for me personally I was just not in the right spot at the right time,” Oswald said. “I wish I could play them one more time, just because I want to beat them. They’ll get them next year.”

The team finished the season with a trip up the coast to visit Humboldt State, 5-16. The Gators swept the Lumberjacks at home in October and are looking to repeat that success.

“We’re like the tale of two teams. We’ll have one good night, one bad night. I think tomorrow will be a good night,” Hall said.