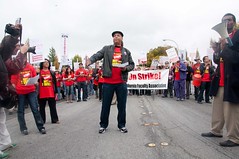 Nicholas Baham, an associate professor and chair of the department of ethnic studies, protests at CSU East Bay during the California Faculty Association strike. Nov.17, 2011. Photo by Nelson Estrada.

Members of the California Faculty Association from throughout Northern California gathered today at Cal State East Bay as part of a planned strike in protest of on-going contract disputes with the CSU system.

Cornel West, philosopher, author and member of the Democratic Socialists of America, arrived at Cal State East Bay at about 4 p.m. He was set to speak at the campus before the California Faculty Association planned on striking, but said that he was inspired to be at CSUEB.

Approximately 100 picketers marched down Harder Road and West Loop Road around 11:30 a.m. through the campus down to Carlos Bee Boulevard. They were followed by police.

They chanted, “Our university,” and carried a banner that said “On strike! California Faculty Association.”

At noon picketers met up with Carlos Bee Boulevard protestors and united to participate in a flash mob to the song, “We Will Survive.”

Afterward, a circle formed around Bob Wieckowski, assembly member of the 20th district of California, and Dean E. Vogel, the California Teachers Association President, who spoke in the middle of protestors.

Police set up a barricade on Carlos Bee Boulevard in front of Cal State East Bay at about 2:45 p.m., completely blocking traffic from using the entrance.

Protestors say this is about much more than money.

“I feel that almost everything that I try to build and work on is threatened, and a lot of it is being destroyed and part of that is the actual feel of the place,” said SF State professor Anatole Anton. “Students and the relationship between students and teachers, and all of that is kind of in jeopardy.” 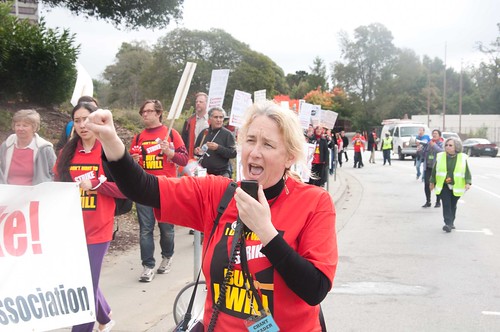 Protesters at the CSU East Bay California Faculty Association march through to the campus. Nov.17, 2011. Photo by Nelson Estrada.