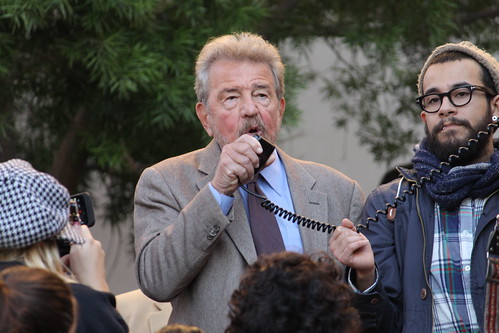 SF State University President, Robert A. Corrigan, speaks to the Occupy protesters that gathered in front of the Administration building, Dec. 1, 2011. Photo by Hang Cheng.

At approximately 3:15 p.m., a small group of students gathered outside the Cesar Chavez Student Center to begin the scheduled rally. As the minutes went by, their numbers greatly increased.

Lalo Gonzalez, a fifth-year criminal justice major, was one of the leading voices.

“There is no hierarchy. We are all coming together as one to rally. We are waging war on big banks, the main reason for this financial crisis. All that foreclosure money they received could have gone to higher education,” he said.

After a few people took turns on the microphone to voice their opinions about the fee hikes, the rally moved into Cesar Chavez where the students then preceded to wrap the two Chase ATMs in plastic wrap to chants of, “We got sold out, banks got bailed out!”

The two Wells Fargo ATMs located outside of the student book store were next on the list. Instead of plastic wrap, however, the group plastered pictures of Monica Lozano, a Bank of America board member, and Bill Hauck, a California State University trustee, all over the machines. The pictures said “Meet the 1%” and gave quick facts about how much money banks and their executives have earned.

The group then turned their sights toward Corrigan. The initial plan was to stand outside the Administration building and read a written letter to Corrigan over the loudspeaker. But things got more interesting when he came down to the rally to address the students personally.

Students were generally peaceful and took turns one at a time to ask Corrigan a variety of questions from fee hikes to writing letters to government officials and salary donations. He thinks the problem is much bigger than the 9 percent fee increase.

“I and my colleagues have worked on this for four years,” Corrigan said. “We have met and written with legislators. We have done everything to build support. Now it’s time for you to show your support by getting out to these legislators. It isn’t just about a fee increase. We need more money and new legislation.”

After more than an hour of increasingly similar questions, Corrigan turned and walked away without a word at exactly 5 p.m. The general feeling from the crowd was that he doesn’t care about the students and that it was time to “make him care by occupying campus.”

The remaining 100 or so students then proceeded to set up tents inside Malcolm X plaza in preparation for their campout. When asked how long they intended to stay, one anonymous student replied, “Indefinitely. As long as the people of the world are subjugated we will occupy our place of education.”