The workshop, held in the Cesar Chavez Student Center Tuesday, was sponsored by the Educational and Referral Organization for Sexuality in order to raise awareness and educate students about healthy self-gratification. 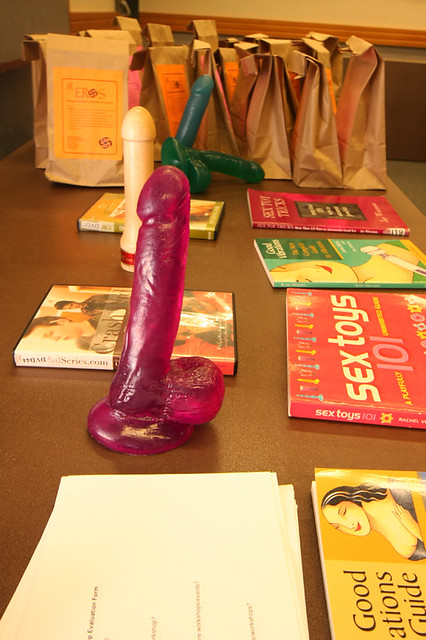 The presentation featured a lecture and demonstrations by sexuality educator and psychotherapist Heather Powers, who explained the power of sexual pleasure while discussing the proper use of a variety of sexual devices.

“Any topic you’re afraid to talk about is exactly what you should be talking about,” Powers said. “There are no limits. Question sex as you would anything else.”

Powers also described and demonstrated the effectiveness of condoms and lubricant with the help of a few volunteers, and the audience roared with laughter when volunteers rubbed lubricant-laced gloves together in front of the group.

“The best way to play is on the clitoris,” Powers said regarding effective self-pleasuring techniques.

Powers discussed the advantages and disadvantages of phallic devices and recommended condom usage and lubricant for all as chemicals in some toys may cause bacterial infections.

She also shared her preference, an older, less compact device.

“I love the Hitachi Magic Wand,” Powers said. “That’s the only toy I ever use.”

The majority of Powers’ presentation was catered to the mostly female audience with advice on which particular sex toys are the best for females.

However, Powers did not leave out educating the men in the audience. She offered them self-pleasuring technique advice and recommended they eschew the use of penis pumps.

“They just temporarily engorge your penis with blood and don’t actually enlarge it,” Powers said.

She also advocated stimulation of the prostate gland.

“You can reduce the prostate cancer risk by either massaging it or having sex,” Powers said.

A former employee of the famed “Good Vibrations” sex shop, Powers tailors her lectures to the demographics of her audience. Many students in the crowd enjoyed Powers’ teaching methods.

Others merely found the subject material as an interesting way to satisfy a class requirement.

“This fits in with my Images of Eroticism course,” said Joshua Schulman, a 19-year-old business marketing major who attended the workshop for the extra credit opportunity. “And I’ve seen some crazy stuff.”

Despite the sensitive material presented, EROS did not promote any particular sexual agenda and neither discourages or encourages a sexually active lifestyle.

“I didn’t think so many people would show up,” said EROS assistant director Kayla Douglas, a 19-year-old health education major. “It’s good to see there’s no taboo in discussing all of this.”

In accordance with her psychotherapy background, Powers believes the power of sex and pleasure (or lack thereof) associated with it is much more psychological than it is physical.

“If you’re interested and feel good about it, then it’s good for you,” Powers said. “Everybody is different and is pleasured in different ways.”