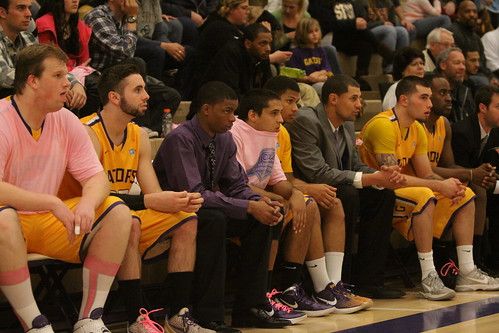 The SF State's man basket ball bench players sits on the sideline during the game against CSU Los Angeles on Fri, Feb. 24, 2012. The bench players have the better combined records in the league. Photo by Hang Cheng.

For SF State men’s basketball team, the athletes coming off the bench have enhanced the team’s success by outscoring opposing benches in 19 games.

The 2011-2012 season for the team ended with a losing record, despite close games and strong efforts. Head coach Paul Trevor has speculated as to what went wrong this season, but the Gators fiery second unit was a consistent force that kept the team strong.

The highest scoring record this season from the bench occurred Jan. 5 in a game against Cal State Monterey Bay when the Gators’ second unit combined for a whopping 52 points. The bench continued to rally off 11 straight games outscoring their opponent’s bench. However, the major smudge on their performance is that the team went 9-19 while the bench continued to outscore opponents. Many of these players will be returning to the team, a promising start to the next season.

“We’ve got to get better, and we will,” Trevor said, who looks forward to the returning players and upcoming season. “I’m definitely proud of the way we’ve competed.”

Only four seniors will leave the team this season, leaving the majority of the Gators’ roster intact for next season. Their departure opens up minutes for other players who may have had limited minutes last season.

The second unit continued to impress in one of the most significant outscoring games of the season against the Academy of Art University. The Gator bench scored 40 points, while holding opponent’s bench to just four points. The bench can become a high powered offense at times, but is also capable of nailing down opposing benches as well. In 10 games this season it has held opposing benches to an average of 15 points, while scoring more than 30 bench points in seven games this season.

“If our bench is outscoring other benches than I would expect our starters to do the rest. It is a shocker,” said freshman guard, Rico Matheney, who only participated in six out of 24 games off the bench this season.

The statistics for the bench players individually are nothing extraordinary. In fact, no bench player averaged double figures this season. However, these bench players have proved to be extremely effective for the majority of the season as a unit. Players who have started fewer than 15 games this season are combining for a total of roughly 33 points and 18 rebounds. Yet, the Gators continued to struggle for victories.

“The bench isn’t the problem with our team really, (we) just haven’t been able to close out games,” said Tyler Brown, senior guard who started in 13 games this season. “We got a really deep team and everybody on our team can play so whenever somebody is called on they just make the best out of the opportunity.”

Trevor has been rotating the starting lineup all year and believes some of his players deserve to start, but likes having scorers come off the bench to give his team a spark. Although this implies an unsteady starting line, Trevor’s strategy shows the team’s diversity and the reliance on every player to succeed.

“What you give us on the court lengthens how long you get to stay on the court,” Trevor said. “If you’re not doing too many positive things you’re going to come out pretty quickly.”

Some players believe there is an added pressure coming off the bench that can make things a little more difficult. Their time is limited, so only minimal mistakes are tolerated and bench players must play efficiently not to be detrimental to the team.

“(Trevor) is a pretty hardcore coach, he doesn’t like mistakes and if you mess up once you better come back and get a stop or do something to contribute because if you don’t, your ass is coming out most definitely,” said Methaney.

The constant shuffle of players can also be attributed to the uncertainty of  roles in the beginning of the season. With nine new faces on the team, players who had the skill to start were placed on the bench because a lot was unknown in the beginning of the year. Some players were unsure of where they were going to fit in and how to become an effective playmaker on the floor.

“The chemistry is pretty good ending the season,” said rookie guard Robbie Herndon, who was fifth in scoring on the team despite starting in just five games. “The bench knows when it’s time to come in, it’s not to to let the team down, it’s to pick the team up.”