Day of Action moves forth to City College 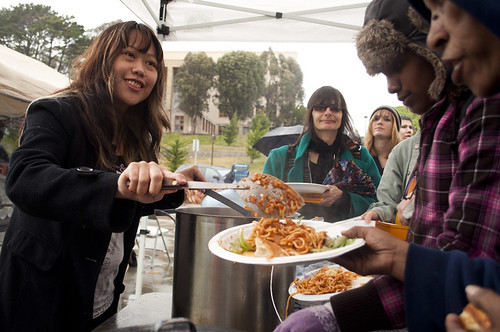 “Education should be free! No cuts! No fees!” chanted the crowd of about 100 people who marched from 19th and Holloway Avenues to CCSF.

“I’m here to show support and solidarity with fellow students,” said CCSF student David Quintana, 19. “How can we have a strong society without education and skills?”

Although he supported the efforts of students to organize the protest, Quintana said he would have liked to see higher numbers show their support.

“I wish people of different types would have shown up,” he said. “We are more than just students. We are students and we are caregivers and workers.”

Quintana lived in Santa Rosa and attended Sonoma State for three semesters until transferring to City College.Bbudget cuts affected his ability to get a degree, he said.

“I had to leave because of budget cuts,” Quintana said. “It was hard to get G.E.’s and acquire classes. There is a declining quality and incremental price.”

“There is a proposed $36 million cut for City College,” he said. “Last time fees went up, the Vice Chancellor of city colleges said in an e-mail that 300,000 students would be denied acceptance.”
Cabrera said another probable financial change is the Board of Governor’s waiver, which assists low-income students with enrollment fees.

“They want to change the Board of Governor’s waiver to be merit-based instead of need-based,” he said.

Cabrera is a leader of the Save Our Schools, a group of CCSF student organizations dedicated to working together to produce change. Cabrera said that clubs involving equity, sustainability, and
activism come together with a collective goal to make change.

Another precarious issue amongst the cuts to higher education is summer school. Summer sessions had been offered at CCSF consistently until last year when cuts disallowed a summer courses.

“We are supposed to have summer school that students can take advantage of, which we didn’t have last year,” said Dean of Student Activities Samuel Santos.

The limited access to educational resources is something that Santos disagrees with.

“It’s really challenging and it’s a hard time for students,” he said. ”And cutting funding for education cuts students out of the process.”