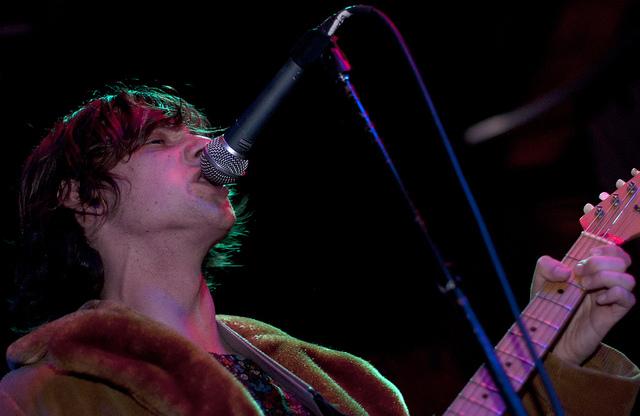 Six hip looking 20-something-year-old guys load their gear onto the stage of the empty Brick and Mortar Music Hall. Under the club’s high arching ceiling stands mid-tempo indie band NO. Juxtaposed by the band in white, the frontman wears a black jacket while moving equipment, casting an echo through the venue as he quietly sings to himself.

Wood Shoppe will be doing a country night. It will include the Tumbleweed Wanderers who performed at the final day at this summer’s Outside Lands Festival. The night will also feature The Ferocious Few, Brent Amaker & The Rodeo and DJ Britt Govea of (((folkYEAH!))).

Within an hour and a half, the club is filled with college-aged fans for the monthly free event that takes place the first Tuesday of every month — Wood Shoppe. Organized by Wilson Zheng, Robin Kim, Acacia Newlon, Abby Sprague, and Zach Cepin, staffers from the booking agency High Road Touring, the event is growing in popularity in only its seventh month.

“I would like it to get off the ground where it does 250 to 300 people every time,” said Cepin, band manager at High Road Touring and founding member of Wood Shoppe.

He reached that goal Aug. 7 with just less than 300 people attending the three-band show. Cepin, a 2007 graduate of the communication studies program at SF State and the oldest member of the group at 29, uses the lessons learned from past mistakes — like the first show he booked when he was 18 and lost a chunk of money — to guide this event into its maturity. He said it takes a while for people to recognize the first Tuesday of every month as the night to go to Brick and Mortar.

The band Foxygen, closing act at Wood Shoppe for the month of August, liked the fact that the event was free, but also loved that it was 18 and over. “I think all shows should be 18 and up,” Sam France, lead vocalist for Foxygen, said. “I really don’t like the 21-and-up thing. I don’t think music should be based around drinking.”

Bradley Hanan Carter, lead singer of NO, who also performed at the August event, enjoyed the energy in the crowd.

“We’d love to try and come back to do the event again,” Hanan Carter said.

And he wasn’t alone in looking forward to returning to Wood Shoppe.

“I didn’t know anything about who was playing tonight, but NO was rad,” Jenna Welch, an audience member who came to the event with some of her friends, said. “I would come back next month.”

The event spawned organically and was influenced by one of Cepin’s friends who booked a similar night, “School Night” in Los Angeles. The first place that popped into his mind when venue hunting for Wood Shoppe was Brick and Mortar.

Luckily, the venue agreed to take a chance on the event and open its doors for free, hoping to sell liquor to the crowds. The event’s two liquor sponsors, Sailor Jerry and Trumer Pils, help Wood Shoppe pay touring bands. Abby Sprague, 2009 SF State graduate from the communication studies program, takes care of the publicity for the event.

“(It’s about) helping people discover new music and bringing out a full crowd where people can hang out with like-minded people and meet new friends,” she said. Like Cepin, she mentioned there isn’t much money involved in the event and considers it a labor of love. Sprague and Cepin say one of the biggest influences in their current music endeavors was Dr. Frederick Isaacson, assistant professor of communication studies at SF State, who guided them toward their employment at the band management company High Road Touring, where they both started as interns. Their experience there has given them accessibility to a wide range of bands.

Adrian Rodriguez contributed to this report.