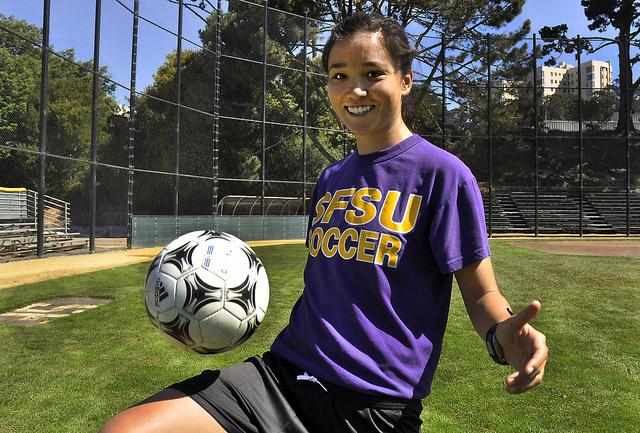 It stole her heart at a young age and to this day remains her one true passion. She moved on for a period of time, but her infatuation with it kept calling her back. The love of her life: the game of soccer.

After spending three years working for a behavioral health program that dealt with criminal justice populations, Robin Bowman, 25, is back at SF State to assist head coach Jack Hyde to another successful women’s soccer season.

Bowman previously wore the purple and gold, and graduated in 2009 with the highest honors and a bachelor’s degree in criminal justice. Although her academic career is complete, her love and passion for the game and the program has brought her back for more time at the University.

After being named the Gator’s Most Outstanding Student Athlete of the year and NSCAA All-West Region First Team in 2008, Bowman, who played mid-field, has plenty to bring to the table. She also has experience coaching high school and various club soccer teams. With that knowledge and experience under her belt, she feels ready to step into the world of collegiate coaching.

“You know once I had a great time here as a player. I enjoyed the school, I enjoyed their soccer program,” Bowman said. “So coming back as a Gator — kind of once you’re a Gator, you’re always a Gator. And to work under coach Hyde, I thought it was going to be a great fit for myself.”

Hyde could not agree more and is happy to see one of his former players step back onto the SF State field.

“I am very pleased that Robin is back at SFSU and involved again with our women’s soccer program, this time as a coach,” Hyde said. “She knows what it takes to be successful at this level and I know she will be able to communicate this to our current group of players.”

Team captain and SF State senior Nicole Vanni believes the coaching change has raised the bar for the team.

“If anything it has brought a new dimension,” Vanni said. “That has probably raised the level a little bit, and Robin has played here before so she is totally familiar with the team and league.”

With Bowman’s prior experience as a student athlete, she hopes to instill in her players a sense of balance in their lives, which is what led her to success during her own collegiate career.

“It is the balance between your academics, your soccer and even your social life, and if you don’t have all three in balance there is going to be problems,” Bowman said. “Since I did it, it has more meaning coming from someone that says ‘Hey, it’s possible.’ There is no excuse.”

Although soccer has been a major component of Bowman’s life, she has learned over the years to separate herself from the game and lay her trust in her players on the field to get the job done.

“For game days you always want to jump in and do it yourself, but you know that it is not your role anymore,” Bowman said. “But during practice is when you get it all out of them, because if you do your work in practice, hopefully during game days you can sit back and relax a bit.”

Heading into the 2012 season, Bowman is keeping her overall expectations and hopes high for the team. With past rivalries and tough competition ahead for the Gators, she hopes to help lead the team to success through their love for the game.

“I definitely learned the love of the game pretty early and that is one of my biggest goals is to instill that in my players,” Bowman said. “It is always the best when you know your players love the game as much as you do because then you can get the most out of them.”

As for leaving her criminal justice career path behind, Bowman said it’s ultimately soccer that drives her life and hopes to one day take on the role of head coach at the collegiate level.

“I had the best of both worlds, and the world I chose was soccer.”