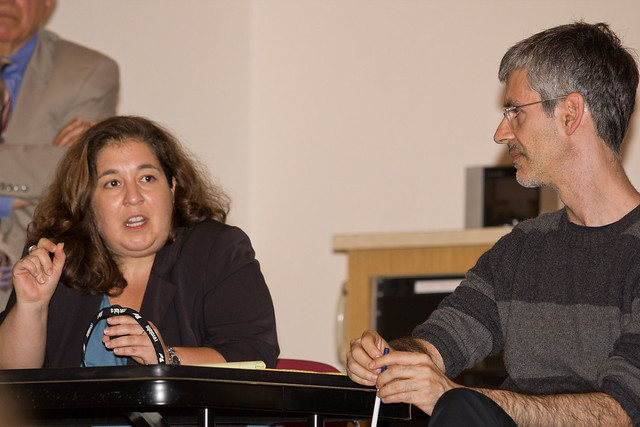 Politically minded students gathered Thursday night in an auditorium on campus to watch Mitt Romney’s acceptance speech followed by a discussion led by two SF State professors who broke-down the event critically, pointing out presumed strategies and techniques in a nonpartisan fashion.

This was the first of many in a lecture series that will take place throughout the fall at SF State. They will act as a hub for discussion and critical analysis of the 2012 presidential election “in light of the historical, social, economic, political and cultural context,” according to a course handout.

“I think it’s a great opportunity for SF State students to take advantage of a historic election and follow it very closely,” Martel said.  “Students will end up being excellently informed with a very deep knowledge of how democracy works in this country. The ability to watch a major political event happening in real time will be very exciting for professors and students alike.”

Each class consists of lectures led by members of the political science department, followed by an open discussion with the audience.

The series is a hybrid of online and in-person lecture and discussion, and this is the first time they have streamed it to the general public, according to co-facillitator Kathryn Johnsa of College of Liberal and Creative Arts.

“It’s an opportunity to showcase the richness of our faculty,” Johnsa said. “And an opportunity for the public to get an analytical and critical view point.”

The course arose so the faculty could illuminate the war in Iraq that started in 2003, Johnsa explained.

Interdisciplinary studies major and political psychology minor, Mario Fernandez attended the meeting and said he was looking forward to the course.

“I went to a community college back in 2008, and we didn’t have anything as together as this. This is so much better,” Fernandez said, citing panels as one of the reasons. “I’m interested to hear what they [the speakers] have to say.”

In the nine years since its inception, the lectures have touched on a variety of topics, with different overall focuses like social justice, race, class, gender and other presidential elections, according to Johnsa.

“I think the main mission of the University is to educate its students and to be an educational force in the community. This is an opportunity we have to reach out and teach,” Kassiola said.

The program reaches out to the community through an online broadcast and live viewing event of election night wherein the entire campus, along with the class, is invited to watch the results in real-time while listening to a panel of professors speak.

Kassiola also informed the audience that “presenters will bring their expertise on the topics, but there will not be partisan speakers.”

“I think (the program) is very relevant,” Camacho said.  “We are looking at a very interesting campaign. It brings a lot of point of views into the forum and offers students and staff different ideas.”

“It’s a microcosm of what the nation looks like,” Camacho said, noting the diversity of the attendees,

Kassiola spoke about the importance of the program.

“I think the main mission of the University is to educate its students and to be an educational force in the community. This is an opportunity we have to reach out and teach,” he said.

Students are also allowed to sign up for the two-unit course classified as Political Science 276 after they receive an “add-card” and take it for credit/no-credit.

Freshman environmental studies major, Chellee Parker, found out about the program at orientation. Parker hopes that by participating she will gain more knowledge before she votes in the upcoming election.

“I am turning 18 in a few weeks, and I just wanted to get into the election and wanted to be really well-informed,” Parker said.