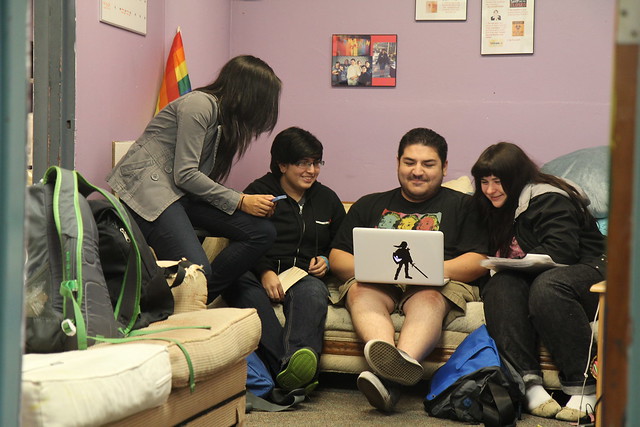 Juan Guzman (with laptop), director of the Queer Alliance at SF State, hangs out with other members of the campus group Sept. 10, 2012. Queer Alliance is a social campus group designed to make students of every gender and sexual orientation feel comfortable together. The group meets upstairs in the Cesar Chavez Student Center Room M-100a. Photo by Tearsa Joy Hammock.

Matthew Ybarra went to conversion therapy when he came out at the age of 13. The SF State women and gender studies major was influenced through his church and decided talking to someone would be better than not. No one told him that the therapy he was going through had been designed to make him straight.

California is considering a bill to protect the rights of LGBT youth when seeking mental health advice. The therapy is known as gay conversion, reorientation or reparative therapy. The process to ban therapy that tries to change the sexual orientation of a minor is underway. Senate Bill 1172, introduced by California State Senator Ted W. Lieu was passed by the Senate Aug. 30 and by the State Assembly Aug. 28. The bill is currently waiting for Gov. Jerry Brown’s approval, which he has until Sept. 30 to either pass or veto.

In the “Sexual Orientation Change Therapy Fact Sheet” published by Lieu, he states that SB 1172 includes almost 40 years of research and notes that an individual’s sexual orientation is not a disease, disorder, illness or shortcoming. Efforts made to change sexual orientation can pose health risks and there is no sufficient evidence that any type of psychotherapy can change a person’s sexual orientation.

Ybarra found out that he was in reparative therapy purely by accident.

“I had taken a psychology class in high school that I had been accidentally allowed to take, and that’s how I figured out what the therapist was trying to do,” Ybarra, 21, said.

Ybarra went to the therapy for three weeks, before stopping after his therapist said something that irritated him.

“He tried to tell me that if I chose the homosexual path my father would abandon me for making that choice, but I know my dad better than that and I knew that wouldn’t be true,”  Ybarra said.

He admitted to his father he had stopped going because of the way the therapist made him feel, and in the end it brought them closer. Ybarra now wants to become a therapist.

Of course not everyone believes that youth should be barred from the therapy. In reaction to SB 1172, Liberty Counsel, a nonprofit organization advocating for religious rights, released a statement Aug. 30.

“If the bill is signed into law, it will harm minors, undermine parental rights, and interfere with the rights of counselors. Under this bill the counselor will be forced to disregard a client’s religious beliefs or change them,” said Mat Staver, founder and chairman of Liberty Counsel.

According to “Sexual Orientation and Youths” published by the American Psychological Association in 2008, reparative therapy is risky considering a therapist’s alignment with homosexuality prejudices might reinforce self-hatred.

“What this bill is trying to do is make it illegal for a counselor to say ‘I can change you’ because a client can experience a shame reaction and think ‘What’s wrong with me?’ if they can’t be changed, and it’s generally crazy to think that orientation can be changed,” said Albert Angelo, health educator at the Student Health Services.

Taylor McElroy, 20, a junior studying criminal justice, grew up in a Mormon home and came out at the age of 14. She explained that at a young age there is a constant battle between being yourself and respecting your religion.

“When I was younger some of my friends would be threatened by these reassignment camps by their parents,” said McElroy, who also majors in communications. “I believe we are born this way, we are born with a predisposition of who we are going to like and love, and because of that I don’t see any point for this therapy to exist.”

She left the Mormon church after she realized she did not share the same beliefs.

“My grandpa would offer me a chance to stay home while people at church would advocate for Prop. 8. After I turned 17 I stopped going to church,” said McElroy.

Director of SF State Queer Alliance, Juan Guzman thinks that the ban will help youth better deal with the other issues that surround their sexuality.

“I’m glad that they are in the process of banning such form of psychotherapy on gay youth,” Guzman said. “Human sexuality is such a free flowing thing and hard to deal with on your own that having someone come and try to form it into what it’s not can cause great psychological damage to the individuals, especially youths who have a hard time comprehending their sexuality as it is.”