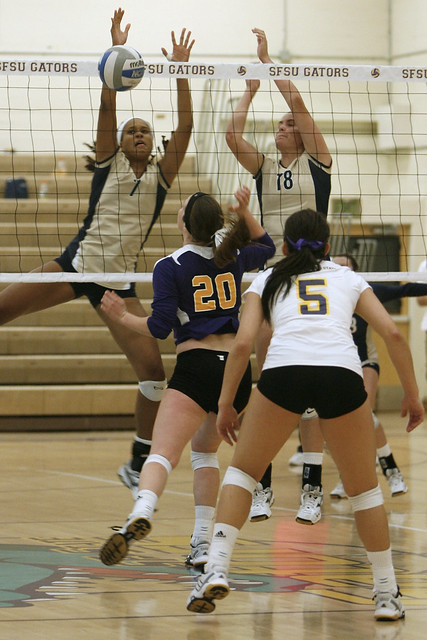 SF State stays undefeated in the opening weekend of conference play as they improved their record to 2-0.

The Gators started off strong as they led the Otters for the first two sets. The first set was filled with action as the Otters repeatedly gave the Gators a run for their money by tying up the score multiple times throughout the match.

SF State picked up the pace in the second set, making easy work of Monterey Bay and shutting them down 25-11.

The Gators managed to hold onto the lead throughout the game until the third set when the Otters came fighting back. The Otters went up 8-6 before the Gators closed the gap and finished off the game. Strong serving by the Gators helped sweep the Otters, which added another win to their record.

Senior Iris Tolenada is pleased with her teammates and felt they contributed in making her job as a setter easy tonight.

“Tough serving and passing helped me a lot in running the offense, so then I could get my hitters up. It just connected well,” Tolenada said. “Hopefully we can keep pulling out the streaks of winning.”

Freshman Meagan Wright was excited about tonight’s win and felt the team focused on what they needed to do.

“We played tough on our side and just put balls where we knew they should go,” Wright said. “We just need to learn how to push through the end and just finish off the match.”

Monterey Bay was led by sophomore Julia Ashen’s 14 kills and sophomore Kelsey Johnston’s 26 assists. The Otters finished with 32 kills, two aces, and an attack percentage of .123.

Head coach Michelle Patton is proud of her girls and feels their winning record is a huge plus going into their road trip.

“It was great to have the first two at home. It instills confidence in the girls. We know it’s going to get tougher and it’s definitely a lot tougher on the road,” Patton said. “We got to bump it up another level here on the road next week.”

The Gators will go on the road for their next four games facing Cal State Stanislaus Sept. 21. The Warriors are 1-1 after this weekend’s conference opener, losing only to Cal Poly Pomona.

SF State resumes play at home Oct. 3 facing off against Sonoma State. The Seawolves started their season with a No. 23 ranking from the AVCA Preseason Coaches Poll.