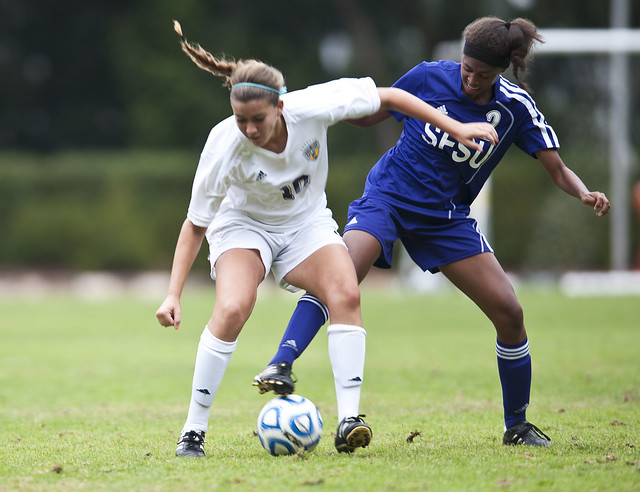 Despite their tough loss, the Gators forced the undefeated Tritons to work for their win as they kept the score tied until the last 15 minutes of the game, when Triton sophomore Cassie Callahan slipped through the Gators defense for the goal.

“That’s all it takes really,” said senior goal keeper Annicia Jones about the Tritons’ goal. “It just takes one mistake and people counter off of that.”

Head coach Jack Hyde said he knew it was going to be a one-goal game after the first half.

“We wanted to attack them, (which is) just what we did,” Hyde said. “I thought we had three good chances to win the game and we didn’t do it.”

Jones, who finished the game with five strong saves in goal, said she thought the team still did great overall.

“Honestly, I thought this was one of our better games,” Jones said. “Even though we didn’t come back successful like the way we wanted to, I think as a team we have figured stuff out and we know how to work together a lot better than previous games, so we’re definitely gonna take that into the next games that we go on.”

According to Jones and freshman defender Bria Adams, one of the main things the team had to keep in mind was to win air balls to stay in the game defensively.

Hyde also said one of the strategies for the defensive line was to play more compact and to step up their line with the midfielders. This strategy worked because by the end of the game, the Gator’s defense trapped the Tritons offense in eight offside calls.

Although the Gators were strong defensively, they did not pull though offensively, according to the statistics.

“I was looking at the stats (and) we had more shots than they did and more chances on goal,” Hyde said. “We’ve got to finish that chance. That’s all there is to it.”

The Gators will play their last home game this month on Sept. 28 against the Cal State East Bay Pioneers at 3 p.m.