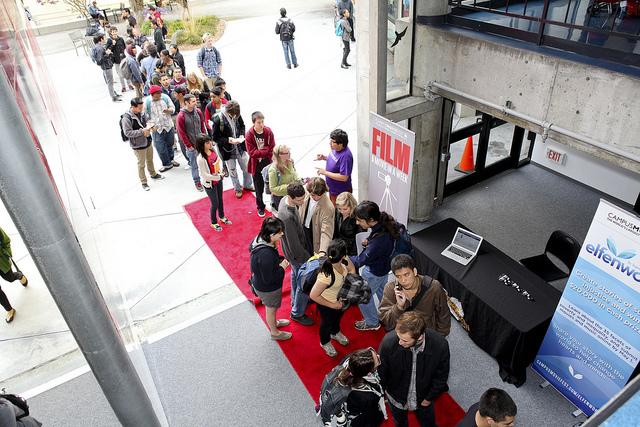 Student filmmakers are preparing to reel out their visions onto the silver screen for the fifth annual SF State Campus MovieFest.

With only a week to do it, University students are tasked with creating five-minute shorts on any topic that are filmed, edited and produced at the free festival.

“Year in and year out, students at SFSU have made some of the best films in the country, winning big prizes and recognition at the school and international level,” said Nishant Gogna, promotions manager for the CMF NorCal Tour. “Even though many SFSU students participate without any prior film experience, we are still amazed to see how bright and creative SFSU students can be.”

Launched Sept. 26, students arrived in a line that exceeded past the doors of the Cesar Chavez Student Center to pick up their film equipment and start the competition. They were given all the necessary equipment from video cameras to 24-hour technical support and training during the process. As they waited to gather their supplies, budding creators spoke among themselves about their film ideas and excitement.

“I really hope we can produce a video that’s educational and inspiring,” said Sharon Daraphonhdeth, an environmental studies major in her senior year.

Daraphonhdeth, who is competing for the first time, heard about the event after seeing fliers around campus. She is planning to have her team’s film feature the three-bin recycling system and the importance of using them correctly.

Students from all different majors, ranging from cinema to criminal justice, will be entering the competition this year.

“My favorite part of CMF is the bringing together of the film community,” Andrew Wong, a freshman cinema major, said. “CMF also brings the great element of giving equipment to those filmmakers who do not own any. It’s something that not many other contests, if any, do.”

According to Gogna, more than 150 teams will be submitting their films Oct. 2 where they will be judged by a panel of SF State students, faculty and staff. The top 16 films will be screened Oct. 10 at Jack Adams Hall during a red carpet finale.

“It’s a great opportunity,” Brittany Delaney, a junior cinema major, said. “When are you going to be able to do this again?”

Students will be competing for best picture, best drama, best comedy and Norton crime drama. Winning films will advance to CMF Hollywood in June 2013. Prizes include professional gigs, $30,000 in cash prizes and having the film screened in Los Angeles, as well as the next Cannes Film Festival.

“Students should enter the contest because it’s a great chance to show your work and test your ability to dish out a quality video in a short amount of time,” Wong said.

CMF is currently on its 12th annual world tour and travels to 70 college campuses worldwide, according to Gogna. Films chosen from SF State will be joining the winners from other college campuses at CMF Hollywood next June in competition for the national title.

“I know students will take away a rewarding experience and a strong feeling of accomplishment of creating their own short film,” Gogna said. “But best of all, and I hear this all the time, CMF will open their hearts and minds to the world of film and media production, a field that is growing at an exponential rate.”