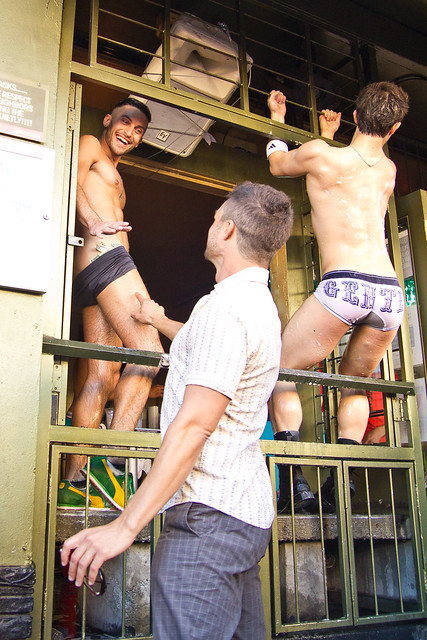 Beneath the iconic rainbow flag, positive vibes radiated around the Castro District as barbecues heated up and beer started flowing at the 38th annual Castro Street Fair.

Always held on the first Sunday of October, the fair raises money for local charities and non-profits through donations by visitors.

“Everyone has been very giving today. We’ve had a significant amount of donations, maybe because the weather is so perfect,” said Kristen Ivanetich, volunteer from McKinley Elementary, one of the many beneficiaries of the fair.

The fair drew large crowds even though the city was filled with events ranging from Hardly Strictly Bluegrass Festival to Fleet Week.

Supervisor Scott Wiener, whose district oversees the Castro, was one of the many who attended the street fair and has been attending for the last 15 years.

“I think it’s amazing that even though there are a ton of things going on in the city today, there’s a huge number of people here,” Wiener said. “It’s always one of the best street fairs.”

Hosted in the heart of the Castro, this fair was founded by Harvey Milk in 1974. It is put on by and for the community and entertains a number of booths supporting charities and community awareness.

Volunteer and SF State alumnus Louis Calahorrano shared what the Castro Street Fair has done for his life. While close to his religion, he and his husband were unsure about what kind of church would be accepting. While attending the fair last year, they stumbled upon Freedom in Christ Evangelical Church.

Christian based church, Freedom in Christ, believes in accepting everyone regardless of their sexual orientation by sending the message of freedom and love.

“We’ve not only gained a relationship closer to God but we also gained a family here as well, who support the idea that God is loving for everyone and everyone is accepted regardless of their sexuality or any other difference,” Calahorrano said.

Live performances, line dancing and free body waxing were just a few of the features of the fair that filled the streets with energy.

“I think the message is to accept everyone and just have fun,” Nuzum said.