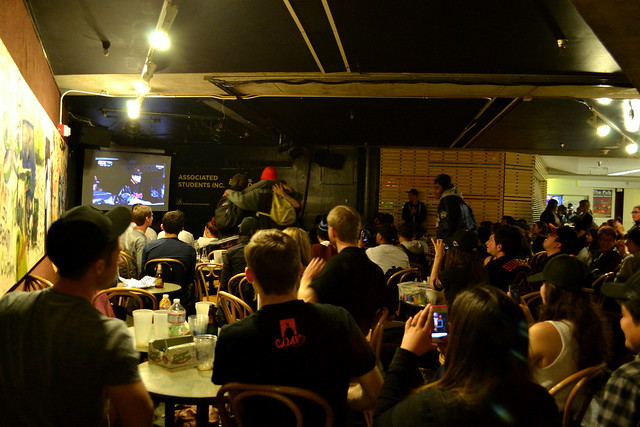 Students cheer on the Giants during Game 7 of the division series on Monday, Oct. 22, 2012 at The Depot in the Cesar Chavez Student Center. Photo by Heather Ito / Xpress

As the victory rain poured down at AT&T Park, SF State fans gathered at The Depot to witness the 2012 Giants clinch their way to the World Series.

The 9-0 win gave fans like junior Gio Bonabie high hopes that the Giants will take the World Series by storm.

“Oh we’re takin’ it. We’re definitely taking it,” Bonabie, 20, said. “Especially after all this confidence, you know, the fans—we’re always behind them 100 percent.”

Bonabie, a kinesiology major, said he started coming to The Depot to watch the Giants games when the division series began along with many other students.

Decked out in her Giants gear, 19-year-old Caity Crooks said she has been watching the Giants games at The Depot since game three of the division series, which was when The Depot started projecting the game on the screen.

“I don’t want to jinx this, but I think every time we have watched it in The Depot, they have won,” said Crooks, who is a junior cinema major.

Crooks comes to watch the games together with friends and all-time fans Nick Clarke, 19, and Devin Zamora, 18, when they can.

Crooks describes the series as “torture,” but she, Zamora and Clarke said they will continue to cheer for their team as they move on to face the Detroit Tigers, who swept the Yankees to advance to the World Series.

The trio has gone to places like Hall of Flame in Parkmerced and Wing Stop to watch the games, but they couldn’t find the same energy or crowd that they find at The Depot, Crooks said.

“It’s gonna get down to the nitty gritty—we’re all gonna have no finger nails, our hair’s gonna be pulled out,” Clarke said. “We’ll be here (at The Depot), knockin’ on wood (and) making Giants chants, just rootin’ on the home team.”

The Giants will take on the Detroit Tigers at 5:07 p.m. Wednesday on their home turf.