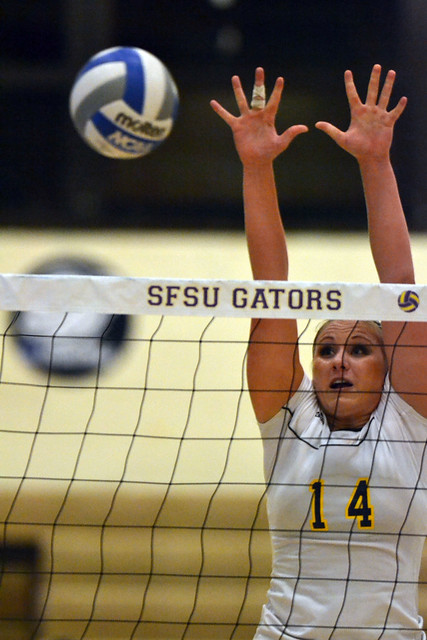 Emotions ran high in the final moments as the crowd cheered loudly on their feet after SF State spiked the final kill of the match, defeating Chico State in a thrilling four sets Friday night.

After tying the game 15 times in the fourth set, the Gators and Wildcats battled for the victory and a chance to move up in CCAA standings.

Intensity filled the gym as the Gators fought to close out the game, and the Wildcats fought to stay alive. Chico State head coach Cody Hein was issued a yellow card after some heated words were exchanged with the referee in the final set.

SF State previously lost its first matchup with Chico State earlier in the season, getting swept in three sets.

The Gators proved to be a powerhouse by taking an early lead and riding the momentum all the way to the finish.

“When we know we have support, it’s such a better feeling than having no one there,” Clark said. “When everyone is involved in the game, the atmosphere is just so much different. It helps a lot to have people here.”

SF State won the first set, taking control of the game after dropping the second set to Chico. Coming back in the third set, the Gators outhit the Wildcats 22 kills to 10 and moved into the fourth with the possibility to clinch the win.

The Gators received strong hitting from freshman Meagan Wright as she recorded 20 kills and led the group with a .432 hitting percentage. Sophomore Kelly Ostello added her own 14 kills while senior Megan Johnson contributed another double double with 15 kills and 12 digs to finish her night.

“Every person on our team wanted to make that last kill, wanted to get that last dig, was anticipating the ball and getting the last point,” Johnson said. “We really came in mentally prepared. Every girl was ready on and off the court.”

Senior Iris Tolenada achieved her seventh straight double double with 56 assists and 13 digs. She leads the team with 14 double doubles recorded this season.

The Gators finished with a .316 attack percentage, 67 kills and seven aces.

Coming into tonight’s action, the Gators were tied for third place with Sonoma State. After improving to a 10-4 conference record, they will remain tied, since the Seawolves also defeated their opponent Friday night.

“It’s imperative that at this time of the season that everybody is ready to go,” Patton said. ” We had a good week. I think our girls were ready.”

Conference action will resume tomorrow night as the Gators take on Cal State Stanislaus at 7 p.m. The Warriors are 4-10, looking to bounce back after getting swept by Sonoma State Friday night.