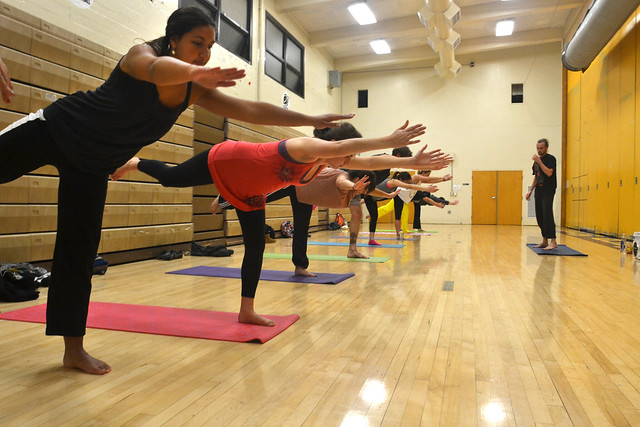 Students practice yoga in the Gymnasium on Tuesday, Nov. 27, 2012. The class is free for students to attend and are led by Jeff Cope. Photo by Andy Sweet / Xpress

Deep breathing, a long stretch and a well-earned “namaste” can do wonders for a person’s mental outlook.

With finals looming, some SF State students have found a way to relieve stress and body tension with Campus Recreation Group X yoga classes, which enables them to concentrate on their studies.

Although yoga offers a wide range of benefits — such as becoming more connected to one’s body and mind through movement, breathing and stretching, according to Group X yoga instructor Meredith Olson — one of its more noticeable benefits is shown through relaxation.

“A lot of students do express to me how grateful they are for the opportunity to take classes on campus,” said Olsen, who is also the student fitness and wellness manager for Campus Recreation. “Yoga studios are expensive or sometimes difficult for students with busy schedules to get to and the Campus Rec classes make yoga really accessible to a wide range of people.” 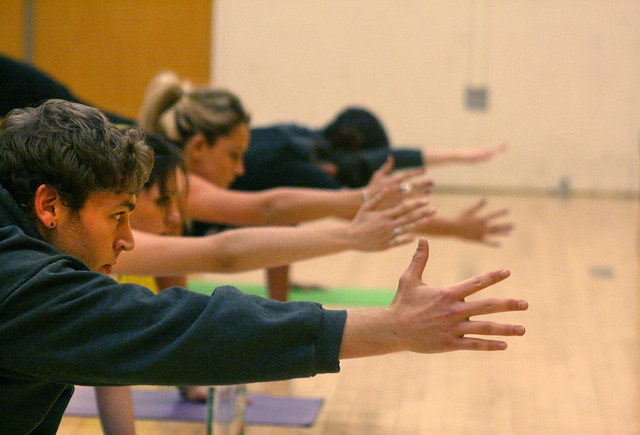 Andrew Winthrop and other students practice yoga in the Gymnasium on Tuesday, Nov. 27, 2012. The class is free for students to attend and are led by Jeff Cope. Photo by Andy Sweet / Xpress

Senior Amina Semmoud, who has practiced yoga off and on for seven years, said feeling relaxed afterward helps her concentrate on her homework later on in the day.

“College is really stressful so it’s nice to be able to do yoga and just relax,” the physiology major said.

By practicing yoga, Student Health Services nurse practitioner Linda Meier said students can not only relieve stress while concentrating on balancing in positions, but also find ways to breathe more deeply, which is a major contributor in being able to calm down.

Other students, including jazz piano major Mali Carter, find yoga improves their musical abilities. Carter has only been doing yoga for a few weeks and plans to continue practicing during winter break.

“Well it helps me to stay relaxed and it strengthens certain muscles that I use when playing piano, such as my triceps, my biceps, my back muscles and my abdomen,” Carter, 30, said.

The practice has grown in popularity among students of all ages, including 21-year-old Rachel Critelli, who found her love for yoga after she started taking University classes three years ago.

“I was always interested in yoga,” the senior Chinese major said. “I did yoga here and there, but I started really coming (here) because the classes here are so convenient and I could just come whenever I wanted. It was free so, why not? And you know, it’s sort of addicting so I just kept coming back.”

Olsen, who has taught the class for the past three semesters, emphasized that yoga is for anybody — male or female.

“Yoga was actually created for men, by men; so the stereotypes in the West about men and yoga are a little ironic,” she said. “I do think it’s great that women have become such strong and empowered representatives of the practice, but people who think men don’t do yoga have probably never been to a yoga class.”

Jeff Cope, two-year yoga instructor at SF State, said he had those stereotypes as a man before taking his first yoga class five years ago after an injury.

“I had the same stereotypes before I really started experiencing what it could give me,” he said. “I remember the first time I actually went into a yoga class, I couldn’t stop smiling for the rest of the day. I was like, ‘OK, maybe there is something to this.’”

Cope said stereotypes about yoga practitioners should be dismissed.

“A lot of guys don’t want to come to yoga because they think it’s feminine or they want to go lift weights or something.They want to get muscular and they don’t want to just kind of relax or stretch out because they’re inflexible,” he said. “They always have all these reasons not to come when they really have never done it.”

Critelli said yoga is addictive because of the state of mind yoga puts her in.

“We learn that if all of your muscles are relaxed, your mind’s also relaxed,” she said. “So when you’re just paying attention to your body, you’re all relaxed and your mind is totally clear so it’s a cool feeling.”