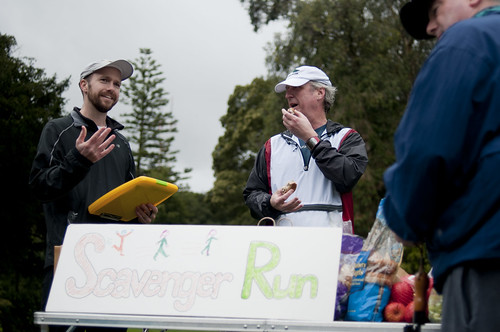 Club President Tom Collier and club members Jay Kloepfer (left) and Mark Lantz (right) gather round to announce the winners of the scavenger run at Golden Gate Park on March 19. The Half Full Running Club is a new San Francisco based running club that focuses on training runners for marathons but provides a lax attitude that supports both casual and competitive runners. Henry Nguyen / staff photographer

Dressed in sturdy running shoes, jogging pants, and thick sweaters and jackets, the cold rain had no impact on determined runners as they hunted to find mystery items in a competition of will, wit and fitness.

Approximately 13 runners gathered at Sharon Meadow in Golden Gate Park in the early morning hours March 19, ready to partake in a scavenger run sponsored by The Half Full Running Club.

“Mieke (Strand), one of the runners, came up with the idea initially about month and a half ago,” said Tom Collier, the event’s coordinator. “We started to put the details together and ended up picking one of the rainiest weekends.”

The runners explored the park in teams and brought back photographic proof of the 10 mystery items scattered throughout the park, running about four miles in the process. Each team had to submit all the photos on one camera as a way to encourage the teams to stick together.

“A part of this is just to have fun for our members, but it’s also to bring people from outside the club, introduce our club and hopefully get some new members that way,” said Collier, an avid runner for 20 years.

Some of the mystery items were obvious, like the colossal statue of Francis Scott Key, while others were subtler, such as mystery item No. 6 entitled “A Living Roof.” That clue led runners to the iconic living roof of the California Academy of Sciences.

Other mystery items included a turtle, a slide, a large mammal and a boat on the water.

“Golden Gate Park is one of my favorite places to run,” Collier said. “You’re not surrounded by concrete or stop lights, so you can just run unfettered. There’s also a lot of cool things to find in the park.”

Collier said the event was intended for everyone, but while some participants were experienced runners, others had a difficult time keeping speed.

Mark Lantz, who began running a month ago, had difficulty keeping up with his teammates’ pace.

The exhausted runner learned from a teammate that he must keep up his sprint for another 45 minutes in order to win the hunt.

Lantz’s team was assembled that morning and members were unaware of each other’s diverse abilities.

Unlike Lantz’s team, Benjy Weinberger, Mieke Strand and Angela Nguyen-Dinh’s team has been running together for two years.  Because they knew each member’s strengths, the team ran at the same pace, jogging together in search of the mystery items.

“What’s great about running? It’s the only opportunity where you really get someone’s exclusive time to have a really good conversation for two hours at a time,” Nguyen-Dinh said. “Otherwise, you have your phone and kids, and things are happening. While running you get to know people.”

Their teamwork was solid. Weinberger was the cameraperson, Strand was the map carrier and Nguyen-Dinh was the clue holder.

Through the vigorous hunt across the park, they kept the mood light – laughing often.

As they headed to the finish line, the team looked as if they had taken a brisk walk. Their breathing was still in control and their steps were firm, solid and quick as they finished the final mile.

Collier said it was a close race, with the second team arriving just two minutes after the first team.

“Some people got different pictures for different things but the first and second-place teams pretty much got very similar pictures.” Collier said. “So looks like they kind of (followed) each other the whole way. Probably back and forth.”

Despite their determination, Weinberger, Strand and Nguyen-Dinh finished last after running for 1 hour and 24 minutes.

However, disappointment did not show on their faces as they waited for the winners to be announced. Some even left without claiming their prizes.

“They would’ve come even if there weren’t prizes,” Collier said. “I think it’s the competition and the element of fun.”

The Half Full Running Club plans to host another scavenger hunt at the Embarcadero.