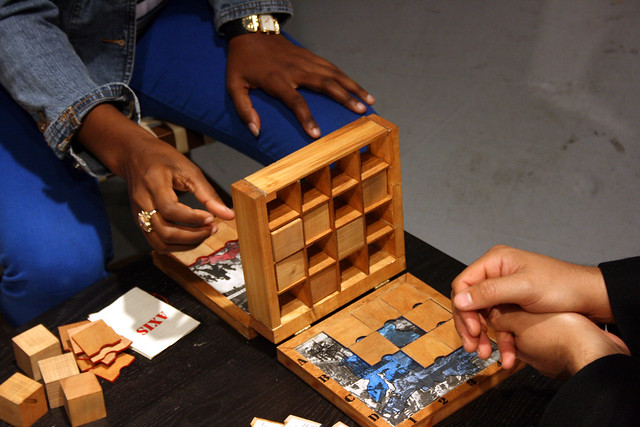 Attendees at the Come Out & Play SF Festival and Exhibition in the SOMarts Cultural Center play a game inspired by the Berlin Wall, Saturday, Nov. 17, 2012. Photo by Andy Sweet / Xpress

From hopscotch to art gallery heists, the SOMArts Cultural Center has been transformed into a place for unique play experiences.

With games inspired by everything from parkour to women of the Wild West, Come Out & Play SF Festival and Exhibition encourages a variety of interactive play for people of all interests, ages and abilities.

“I think a lot of people have a very narrow view of what they think is a game,” said Heather Browning, a game designer. “What’s great about this is that soccer is a game, and chess is a game, and ‘Halo’ is a game, and so although these are all different types of games, they still bring people together. You can see the whole gamut of ‘what is a game?’”

The festival started in New York in 2006 and debuted in San Francisco last year. A huge turnout is expected this year, with many people pre-registering for games on Eventbrite. Word-of-mouth has been key in generating interest.

“The reason that I love (Come Out & Play) is that it seems increasingly important,” co-founder Catherine Herdlick said. “When we first started, it was before iPhones, before apps, before Foursquare, if you can imagine that, and we had a lot of tech games, but I really like folk games. It’s something that brings people together. I think it’s important to see how differently different people play.”

Along with putting the event together, Herdlick contributed a game called WANTED!, an interactive street fiction played by up to 10 players with SMS-enabled cell phones. Players take on the role of a cowgirl, which Herdlick established in contrast to popular games that are dominated by male characters.

“I think it’s really important to just create a different experience,” she said. “It’s something that a family could be playing, and maybe the kid is sharing the phone with the mom, and the kids will say, ‘What does it mean, suffrage?’”

Not a fan of Westerns? Try the Hearst Collection, an art heist game that challenges players to steal donated pieces of the Hearst family’s art collection without tripping the alarm.

“We want to give people a way to actually experience things you would normally watch or listen to or see on TV,” said John Teasdale, co-creator of the Hearst Collection. “We want to bring that out into the real world.”

For a physical challenge minus the art theft, try Sloth Chase, created by game designers and traceurs Eric Rubin and Albert Kong. A parkour-inspired lava tag, Sloth Chase challenges its participants physically and creatively to navigate obstacles in the city.

“It’s been exciting to see how different types of people approach it,” Rubin said. “You don’t have to be a super-jock.”

The opening night of the exhibition was just the tip of the iceberg. Nearly 30 different games will be played during the festival, which runs through Dec. 19. Exhibit attendee Catalina Nan, who heard about Come Out & Play from a friend, said she hopes to participate in more of the festival’s games.

“It’s exciting to see people get creative without any inhibition and just play around like they were kids,” Nan said. “I felt like I was a kid again. It made me feel good.”