Protestors march for end to U.S. war and employee exploitation 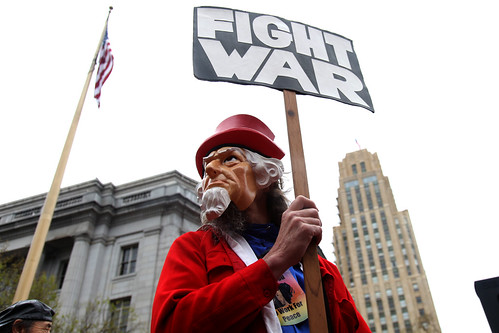 Protesters took to the streets of San Francisco Saturday to oppose the act of war – those being waged around the world as well as the figurative war on workers.

Marking the eighth anniversary of the Iraq war, many people protested March 19 in hopes of ending war and occupation in areas all over the globe.

This protest came at an interesting time as it was the first day of American and European strikes against the regime of Col. Muammar el-Qaddafi of Libya.

“I agree with the goal of the march, to stop the wars abroad and to stop the war on workers at home,” said Lawrence Abbott of San Leandro. “It is an important issue. Even though I don’t really have the time, I think everyone really needs to make the time in a democracy, otherwise we won’t have a democracy.” 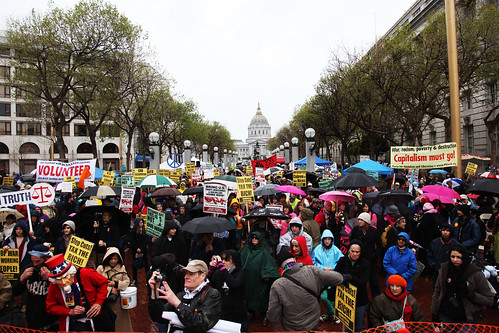 Saturday’s events began at United Nations Plaza with a noon rally that included guest speakers and a spoken word artist.

At 1:30 p.m., an estimated 1,800 participants marched down Market Street carrying signs and chanting. The march stopped traffic and disrupted public transportation before ending at the Westin St. Francis Hotel, where another rally took place concerning contract issues between the hotel and workers.

“We always love people coming out and protesting,” said Frank Lara, an SF State student in the teaching credential program. “We don’t measure the success of a protest by numbers, but the consciousness of the people at the protest.”

The Act Now to Stop War and End Racism coalition initiated the march. ANSWER is composed of hundreds of organizations and individuals from across the U.S. It campaigns for civil rights and social and economic justice for working and lower-income employees. They are also against U.S. intervention in other regions of the world.

“You can see that here people are coming together and making the connections and thoughts of all these cuts,” said Lara, who also served as the master of ceremonies for the U.N. Plaza rally. “All the different oppression is tied to the United States war machine. It was really great to see people out here and enthusiastic.”

Many who participated carried signs, some of which read “One More Death Dollar Day,” “U.S. Out of the Middle East,” “Stop U.S. Aid to Israel” and “Capitalism is Organized Crime.”

“People have so many of their own issues,” said Cheryl Kozanitas, an SF State alumna, who participated in the march with a sign that read “General Strike.” “Sometimes it is really hard for somebody to come to something like this.”

She also said that the turnout was impressive given the time that has elapsed since the U.S. launched its campaign in Iraq.

“I think it is pretty good considering this is the eighth commemoration of the invasion and occupation of Iraq,” Kozanitas said. “It is hard for some people to maintain interest.”

The next demonstration is scheduled for April 10 at Dolores Park in the Mission District.