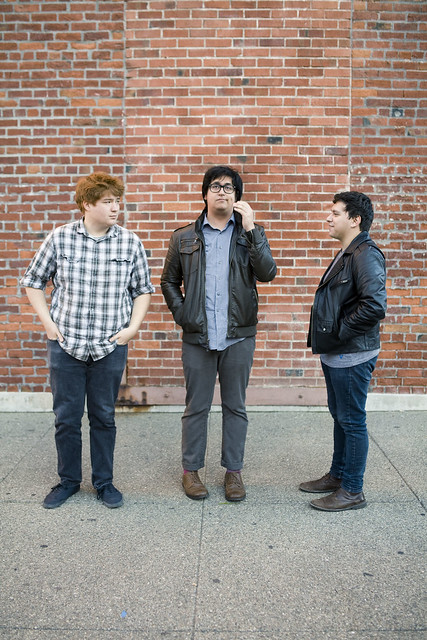 Bears! Bears! Bears! are a San Francisco band made up of (left to right) Phil Cala, Ricky Rios and Evan Leal. The band has just finished recording their first full-length album, "All Dressed Up and Nowhere to Go." The CD is due to release in January 2013. Photo by Anna Larina / Special to Xpress

After an arduous recording process, the band Bears! Bears! Bears! is finally ready to deliver its new album full of danceable doom and gloom.

Self-described as “the Bay Area’s most depressing party band,” Bears! Bears! Bears! fell naturally into music that moves crowds emotionally through lyrics and physically through sound. The first full-length album, “All Dressed Up With Nowhere to Go,” has been a long time coming. Lack of money and time caused several setbacks in the recording process.

“It was only maybe a week and a half altogether, but spread out over, like, two years,” drummer Evan Leal said. “We just have the worst luck as a band. That’s where the title comes from, in part. We’re always ready to do big things, but things never quite work out.”

The album was recorded, produced and mixed by Scott McDowell at Tiny Telephone and Hyde Street Studio C. The band regards McDowell’s work highly, singer and guitarist Phil Cala going so far as to call him a “magician” and “a perfect human being.”

“Scott knows us really well,” bassist Ricky Rios said. “(Recording the album) was one of the funner times I’ve had being in a band.”

Despite the somberness of their music, Bears! Bears! Bears! is something of a riot to work with. Regarding the band’s time in the studio, McDowell immediately launched into the story of an inside joke about Papa John Creach of Jefferson Airplane, which resulted in the band giving him a Papa John Creach T-shirt. 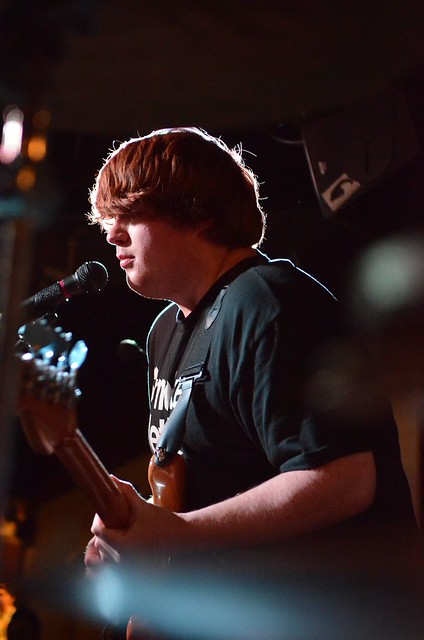 Once the band was able to get into the studio, not a moment was taken for granted. Keys were added to the album, which Cala played on a Rhodes keyboard left at the studio by fellow San Francisco band Train.

“Being in the studio is hands down my favorite thing in the entire world,” Leal said. “Just a lot of, ‘Did Robyn Hitchcock ever drink out of this coffee cup?’ Getting to record our stupid songs in a place with that kind of history was amazing.”

There is quite a bit of good natured self-deprecation that happens within Bears! Bears! Bears!, but the members have no qualms about being downers.

“We write really depressing music, at least lyrically,” Cala said. “But we also like playing house parties and we like people, as much as we hate ourselves. People seem to like dancing to our ‘I hate myself’ kind of music.”

Self-criticism aside, the band knows it has come a long way from covering Joy Division in Rios’ garage in 2008. Where the band goes next is just a matter finding time between busy work and school schedules.

But even Cala’s graduate studies in physics at SF State has helped him make connections in the local music scene. Through the science department, he met Devin Nelson of The Y Axes. Nelson and bandmate Alexi Belchere both contributed guest vocals to “All Dressed Up With Nowhere to Go.” The two bands have built a strong friendship.

“It’s cool because the stigma is that your friends’ bands aren’t very good,” Nelson said. “It’s exciting to have friends in bands that I like.”

The Y Axes have already been asked to play at the band’s release party, though the date and venue have yet to be determined. Currently, the first two tracks can be streamed on the Bears! Bears! Bears! Bandcamp page. Belchere said that even on the slower songs, every second is exciting.

“I would describe their sound as an actual bear — you want to cuddle it, but it’s wild and would sooner maul you than love you,” she said.

The tentative release date for “All Dressed Up With Nowhere to Go” is January 2013. Check out the Bears! Bears! Bears! Facebook page for updates.