Gators set on running to Nationals 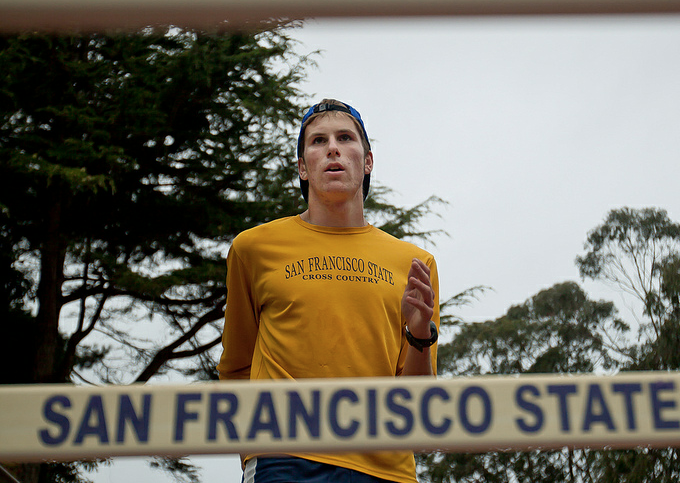 Drew Feldman, a second year cross-country runner, chose to redshirt last season. He drove himself to meets and used practices as an opportunity to challenge the active runners. But this year, he is ready to compete.

“For me, it is about getting to Nationals again,” said Feldman. “Our team has gotten better and our program is rising.”

Last fall a group of Gators made history. For the first time, the SF State men’s cross-country team appeared in the Division II National Championship placing 22nd overall against the nation’s top runners.

The team is hoping to ride into the 2013 season with the same gusto as last November and build on their success. Though the roster has shifted, the crew is confident that with a positive mindset, this year’s returning athletes and newcomers will take them even further.

“Our goal this year is to break into the top 20 at Nationals,” said Feldman.

“They have been teammates for most of their college careers,” he said.

But four out of seven runners on last season’s roster, David Urista, Ernesto Rodriguez, and Captains Brian Trejo and Tyler Deniston, have graduated, leaving holes in what was a well-functioning machine.

“They had a big impact on our team,” said Lyons. “But we have great guys coming back.”

Seasoned runners Bruk Assefa, Ryan Woods and Logan Smith return this fall. With experience at Nationals under their belt they’re provided the opportunity to guide the team to the top.

Assefa, who placed 45th overall at Nationals and finished first among his team, returned to his home country of Ethiopia this summer to train with Olympic Gold Medalist runner Haile Gebrselassie. Two teammates, Woods and Ryan Chio, visited Assefa abroad to train with him.

Feldman lives with four of his current and former teammates, Trejo, Deniston, Woods and Chio. He spent the summer training with them, running 85 miles per week up Twin Peaks and other scenic San Francisco paths in preparation for the new season.

Since the team is confident that the mix of veteran, rising and rookie athletes will bolster the already promising season, the main concern for the athletes now is avoiding injury.

Runner Will Zentmyer spent all last season watching from the sideline, plagued with a season-ending shin injury. Both Feldman and Zentmyer assert that key injuries to any player could disrupt the road to Nationals.

Zentmyer said his recovery is slow, but he hopes to participate in at least one meet this season.

The team’s biggest competition, said Lyons, will be against rivals Humboldt State and UC San Diego. SF State has always raced closely with them, he said, and this year they hope to pull ahead of the competition.

Lyons will rely on his athlete’s experience and speed to take the team to Nationals again this year. But he says a new mindset coming off of last season might give them an extra boost.

“We’re going to train like we’re the best,” he said.

And his confidence mirrors that of the team’s.

“I don’t know what competition will be like, but I don’t see any reason why we can’t make it to Nationals again,” said Zentmyer. “These guys know how to get there and can easily take the new guys up there with them.”