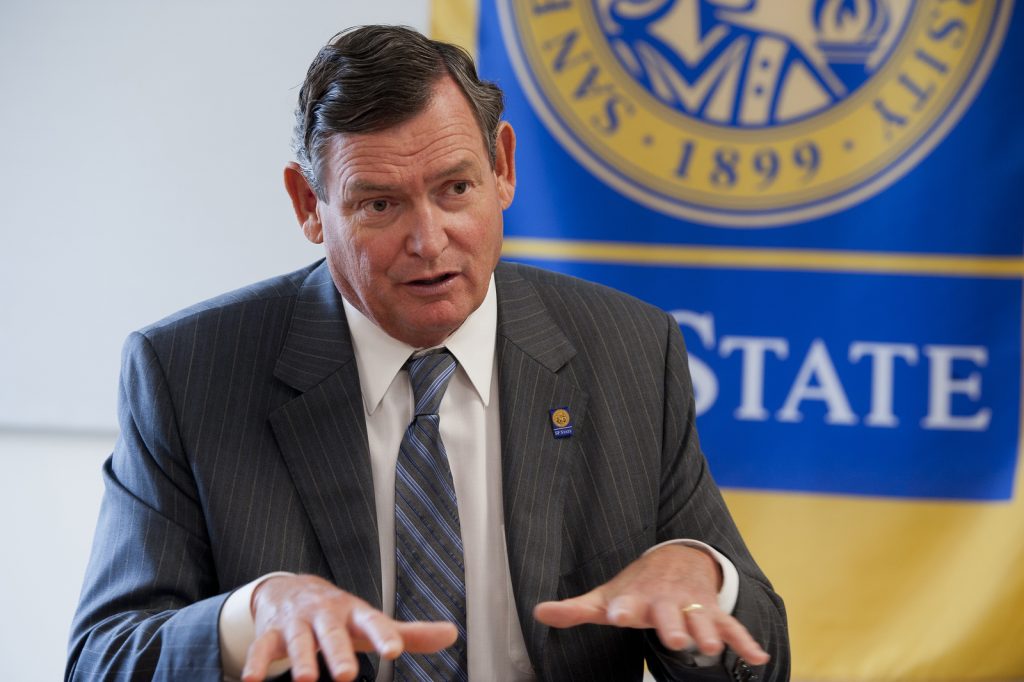 After Timothy White was appointed CSU Chancellor last December, he made a personal commitment to visit each of the 23 CSU campuses during his first year on the job. His visit to SF State last week marked the thirteenth stop on his tour.

During his two-day visit to the campus, the chancellor engaged with students and faculty, asking them about their own experiences at the University. On his last day, White opened up to the Golden Gate Xpress by answering questions most concerning to SF State students, such as the possible outcome of City College of San Francisco’s accreditation crisis and its effects on SF State. He also voiced his thoughts on tuition hikes and his own experience growing up as a first-generation college student.

“As an immigrant kid, like so many of our students and faculty, the California State University and community colleges gave me dimension to the things that I took on,” White said. “One of the reasons I wanted to do this (visit the CSUs), was to make sure each of the 23 campuses emerge into the points of excellence that matter the most to that campus.”

With City College at risk of losing its accreditation, White said the issue was serious and takes a special place in his heart as a first-generation student.

“If I hadn’t gone to community college, instead of becoming an asset to society, I would be a burden,” he said.

“This is not about good or bad administration or accreditation, this is about students and their lives today and their lives in the future,” said White. “If we as a Cal State system focus on this piece, we will provide whatever assistance we can necessary to make sure that the individual students don’t get hurt.”

SF State student Genevieve Leighton-Armah comments on the importance of there being a community college in San Francisco.

“A lot of students take classes at SF State and at City College to reach their American dream, (if city college losses their accreditation) it will affect all of San Francisco,” said Leighton-Armah, 22, criminal justice major.

Both White and Wong have discussed the issue over past occasions, emphasizing that SF State would, by no means, serve as a community college, White said referencing to Wong’s previous editorial letter to the San Francisco Chronicle.

However, the CSU system has also undergone its own share of turmoil. The past decade’s financial crisis continued last school year with a 9 percent tuition increase, according to SF Gate, creating a higher cost for lower quality education.

Despite the difficulty presented by these financially difficult times, White said the CSUs have managed to increase graduation rates by 7 percent even with a 6 percent decline in employees and a 5 percent increase in student population.

“People who say we are not doing our job are crazy, the strength of the university is many things but none more than its people,” said White.

Recently, the CSU’s financial position has improved due to the passage of Proposition 30 last November which has increased taxes to support public education.

“It’s passage allowed the CSU Board of Trustees to rescind a fee increase saving students 249 dollars per semester,” Wong said.

Proposition 30 has also provided the CSUs the opportunity to reinvest in new resources and technology that would enhance the quality of higher education through online courses and additional faculty, White said.

Despite the challenges facing the new chancellor he was able to enjoy his visit at SF State and the University’s commitment to diversity.