Poets stop at SF State to reflect on new works 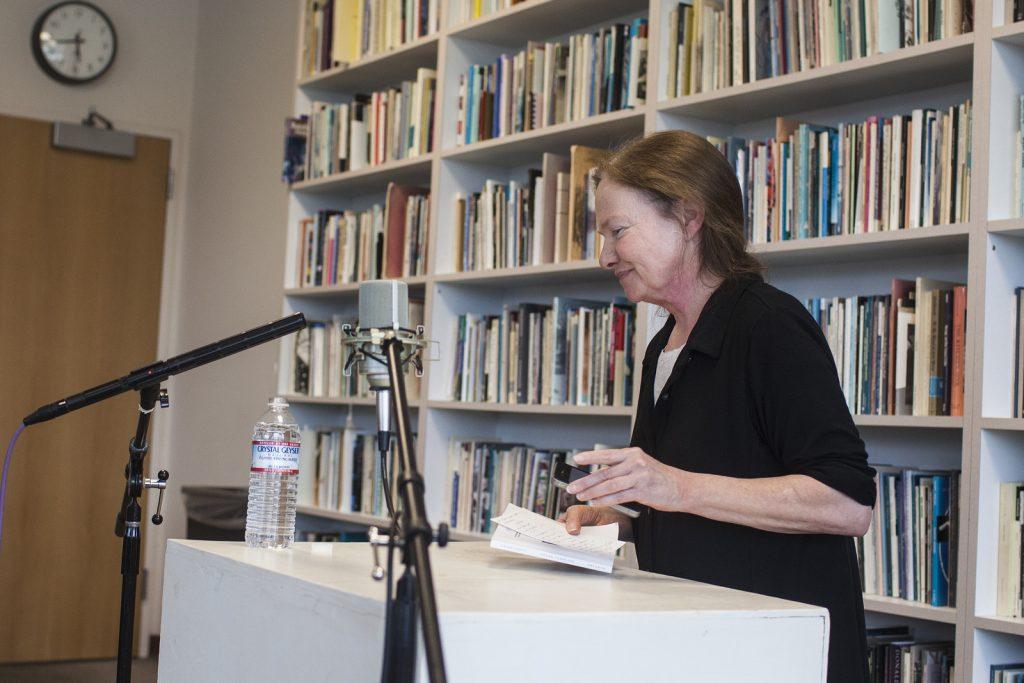 Book tours carry different meanings for Sara Mumolo and Kate Greenstreet. In one case it’s about learning to balance newfound motherhood and life on the road, for the other it’s facing the possibility of her last tour.

Both poets crossed paths at the Poetry Center Friday to read selections from their latest works.

“I think right after I had my baby, I suddenly thought, ‘I’m never going to write again,'” Mumolo said while promoting “Mortar,” a collection of her poems set to be released in October.

“Then as time went on, we got used to each other and developed this routine together,” Mumolo said, whose baby is now 10 weeks old. “Instead of having a writing practice, I have pieces written throughout the day. So I’ll be breastfeeding in the middle of the night, in the dark, and something will come to me and I’ll take a note of it.”

Mumolo added that her new routine changed her writing since.

“I often won’t even remember what it is I wrote and then when I look at it later, I can figure out how these pieces actually work together,” Mumolo said. “So it’s brought a new, sort of mystery to my own writing.”

Beginning what she said is a “mini-tour scaled back,” Mumolo said that she will be doing more readings in spring when her son is older.

“My mom is in town, because she’s supposed to be back at work this week so she’s covering for me,” Mumolo said about getting the time off to perform at the Poetry Center. “So he’s in good hands.”

Greenstreet, the other poet who performed at the Poetry Center, said the tour is for her most recent book “Young Tambling” which was published in February.

“This isn’t the biggest tour I’ve done, but it’s probably going to be the last tour I’ll ever do,” Greenstreet said.

Greenstreet said this was the second stop of her tour, having performed in Portland the night before. She added that she really enjoys reciting her work to students.

“Students are so great, they’re my favorites and I’m not just saying that,” Greenstreet said. “Because obviously, they’re so open and into learning and listening; and they’re fun.”

Greenstreet said that her writing style deals with the struggles and issues women face.

“Well I’m a woman, so it’s on my mind, it probably has been on my mind my whole life,” Greenstreet said. “But I wouldn’t say it’s strictly about that.”

Greenstreet said that the title of her book is partly inspired by a 16th century ballad known as “Tam Lin.” She added that it focuses more on women than some of her previous work.

“In a way, “Young Tambling” is more about that (type of writing) because the hero of the song “Tam Lin” is the girl,” Greenstreet said. “That’s very, very unusual for these old ballads.”

Director of the Poetry Center and American Poetry Archives Steve Dickison said the center usually does about 15 such events every semester.

“The Poetry Center readings are all available to the general public,” Dickison, who also teaches in the creative writing department, said. “Other writers from the community came. It’s a completely public event, but for students as well. It’s one of the ways in which the students in the classroom overlap with the larger world outside the classroom.”

Dickison said the Poetry Center is currently hosting an invitational series, partly funded from student funds and from funds raised outside the University. When choosing who to perform for these events, Dickison said he likes to carefully choose who to group together.

“I’m always interested in pairing together people where there might be some kind of complimentary conversation that emerges between the two writers,” said Dickison. “Not necessarily that they have to know one another beforehand; just something or some connection that might happen.”

The Poetry Center’s next event will be at the Yerba Buena Center for the Arts Sept. 26. Both centers will be co-sponsoring the $10 admission screening for “Way,” a film by Konrad Steiner in collaboration with Leslie Scalapino.