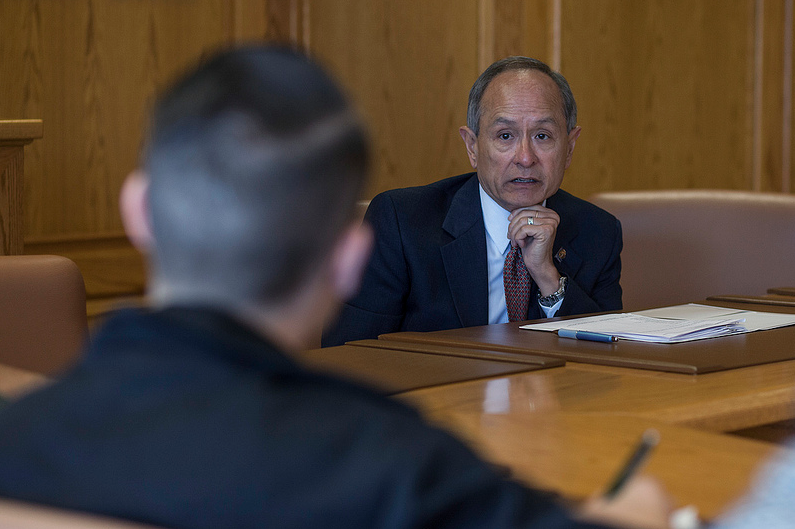 Q: How would you describe your last year here and what are your goals looking forward?

W: Coming to a campus with a stellar reputation with probably the brightest students I have been around in my 40 years in higher education the issue, that I learned my first year is the effort we spent to connect to alums, was I think critically important.

Another thing that I’ll mention…you have to have a deep staff to really make the machine run well. I think they often play a really important but unheralded role within the University.

I want to try a slight shift this year to visit a lot of classrooms. I want to see more directly what faculty are doing, the great work their doing in the labs and in the classrooms.

On a different level, I spent a lot of time last year connecting to the sports program, both club, intermural, and CCAA, our intercollegiate stuff and I think we’re moving ahead really nicely, in giving them some attention that they’ve not had in a long time.

Q: What do you see in your future as president?

We’re going to continue to try to build a lot of bridges to corporate America particularly in San Francisco, build more opportunities for graduate and current students.

I’d like to lay out some big ideas to get us to 2025. We’re also preparing for the University’s first major comprehensive campaign to raise the kind of money we’ll need to be the best university, not only on the Pacific Rim but also on the planet. I have not been shy about telling people, we’re talent rich and asset poor. When you loose a third of your budget and a lot of staff, we need to be very serious about raising dollars to enable faculty, staff, and students to really do what they’re doing.

Q: How’s the search for a full-time athletic director going?

W: We’re forming up the committee. I want people to understand that the search for an athletic director could very well be one of the most important searches we do.  The potential for athletics is immense. I’ve been very clear with all of you in the community, athletics is the front door to a university. We’re looking at the leadership of the athletic department to really rebuild that front door because the rest of the house is magnificent.

Q: What are your thoughts on the current implementation of the Affordable Care Act?

W: Number one, I think it’s about time we extend health care to what we believe are 50 million citizens that don’t have it. I think the ability to provide some fundamental healthcare services is critically important. Second, I think the way in which the president is rolling it out is smart, and I believe it will work; despite the protests of a very small group.

In many ways, I think the Affordable Care Act fits the evolution of health care in general that’s going on. In Michigan I was a trustee at a major hospital in northern Michigan and so the whole transformation of hospitals from profit driven centers to what they call ACOs, accountable care organizations, has been very quick, much quicker than I though it would be.

Q: What is the current status of the Taser program?

W: I’m expecting the policy for its use from Chief Wasley. The training, I want to be first rate and I believe both of those are near completion now.

I can tell you without hesitation that campus safety is a number one priority. It is THE priority. Everything flows from that. For employees, for students, for guests, and I’m really pleased so far with our ability to provide an extremely safe campus.

I have to tell you that one of my first conversations with University police was: do you believe you are currently equipped to provide a safe campus and if not, what’s out there, how are we looking ahead?

I asked a lot of questions about a comprehensive campus safety plan and I just wanted to be reassured that we were always thinking about getting better and so I asked about Tasers long ago because I’d discovered that some CSU campus police had Tasers and some did not.

Q: Last evening (Oct. 6), you went to the 44th anniversary of the ethnic studies department. What does it mean to you to support such a historically unique department?

Some of my own intellectual and social roots started with him. I think he’d be proud not only of me but also others in the group that he affected. I’m really pleased that Dean Monteiro honors the strikers from 1968, but also recognizes the incredibly critical work that the college is doing now.