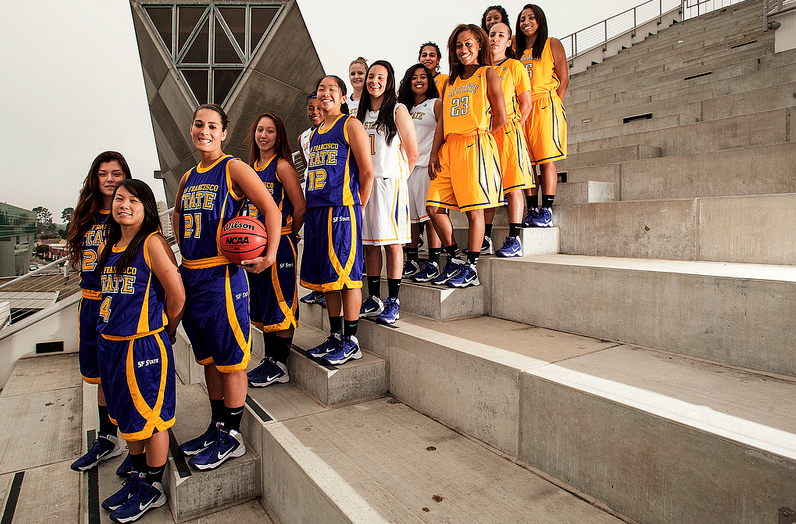 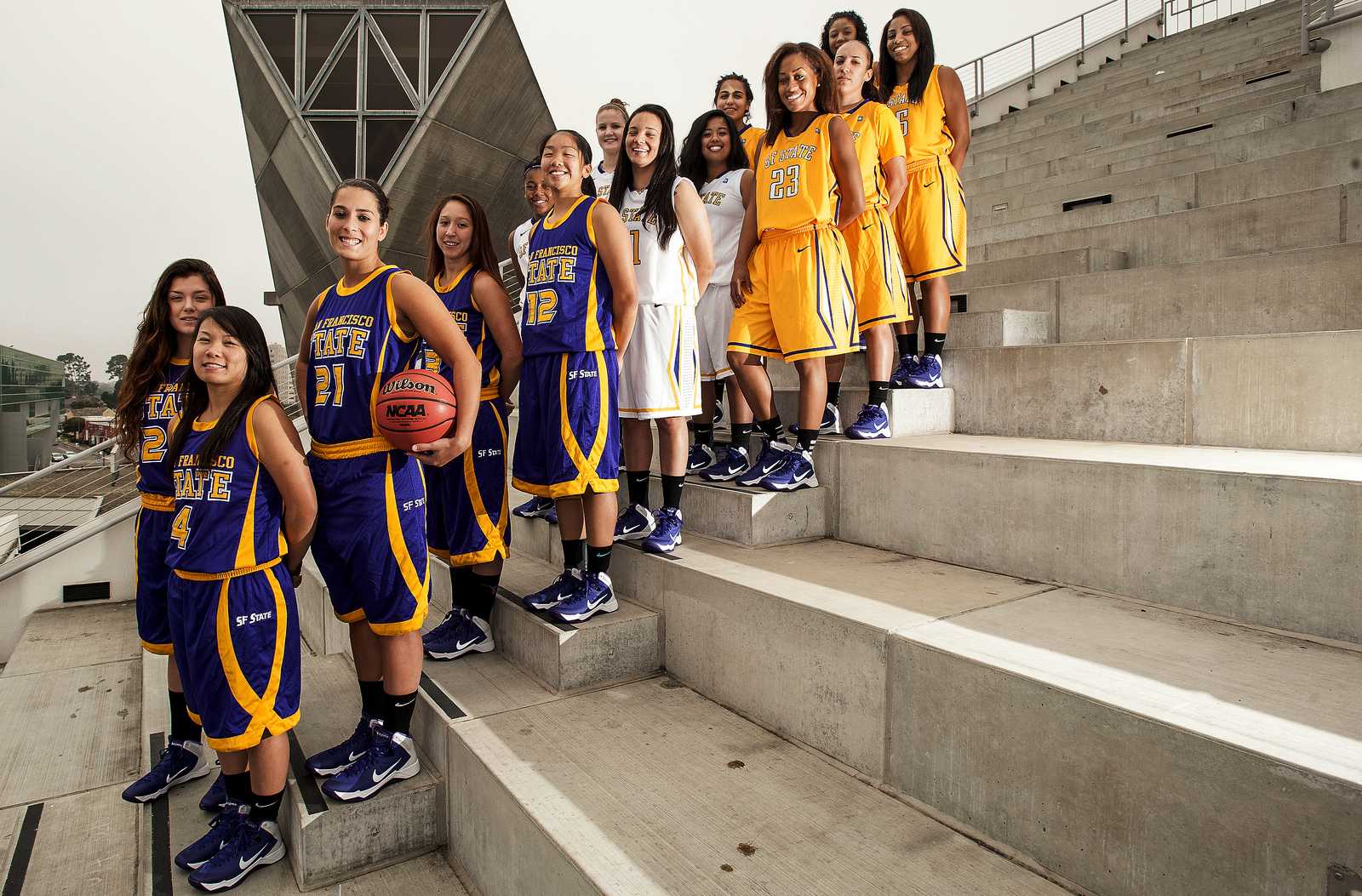 The SF State Gators’ basketball team poses for a portrait on top of the Cesar Chavez Student Center, Oct. 22, 2013. There are ten new basketball players and four returning this season. Photo by Benjamin Kamps / Xpress

SF State women’s basketball is looking to do something that has never been done before in team history: raise a California Collegiate Athletic Association banner.

With four experienced veterans and a tough defense, head coach Joaquin Wallace said the team has the goods to reach the top of the conference, but lack of points at the charity stripe could threaten that vision.

“We could have easily won 15 to 17 games last year,” said Wallace. “We were one of the worst free throw shooting teams in the country last year. I think our average loss was by eight points and we missed 10 free throws a game.”

Last season’s conference champion, Chico State, lead the conference in free throws, making 90 percent of its tries. The Gators, by comparison, ranked second to last with 63 percent. According to Wallace,  if the team improves its free throw percentage this year, some of those close losses could become Gator victories.

Despite its inadequacy at the free throw line, the Gators hope to bring back its tough defense and field goal accuracy under the leadership of four returning athletes, Wallace said.

The veterans, Angela Van Sickel, Lauren Varney, Jennifer Le and Brianna Harden, will guide the other 14 transfer and freshmen players in their first campaign. Van Sickel scored 309 points last season and recorded a team-high 57 three pointers and 113 field goals. The senior only needs 11 three pointers to break the school’s women’s record and aims to eclipse 1,000 career points in her final year as a Gator. Though she will use her final year to set team goals, this season is also the end to a tough personal journey.

“I wasn’t recruited here, I kinda just walked into (the coach’s) office and asked if I could tryout. There was a lot of people who didn’t think I belonged in the program or belong playing D-II basketball, so doing that would be like saying, ‘Yeah, I do belong here and I made a difference,'” Van Sickel said.

On the other side of the ball, Van Sickel’s roommate, Lauren Varney, will lead the team with cool determination, Wallace said. He expects Varney to break through this season after waiting in the shadow of former Gator stars Dominique Hunter and Farrah Shokoor.

“The thing about Lauren is she’s a rock. She’s like the calm voice to the team,” said Wallace. “You never have to tell her what to do. We’ll miss both of those kids because they both know how to be professionals and go about their business.”

Behind these team leaders, the Gators have a contingent of fresh faces hoping for a starting position this season. Wallace said St. Mary’s transfer Katie Batlin is in contention to start in her first and final season at SF State. As a Gael, Batlin averaged 6.3 points per game with a 41.2 shooting percentage her freshman year in 2009. Batlin joined the Gaels after a stellar career at Miramonte High School where she was nominated for the McDonald’s All-American team and was named the North Coast Section player of the year.

The Gators will play with a deeper roster than in previous seasons. Wallace said he has nine players able to contribute compared to just seven last year. A stacked bench is crucial to the CCAA basketball schedule; teams play games consecutively on Fridays and Saturdays, and the starting roster needs to be deep, according to Wallace.

“You have to have a strong bench and something that really comes into play in the second half of the season when everybody is tired or has injuries,” Wallace said. “The depth of a team is so important and those are the teams that usually do well.”

Wallace has scheduled three exhibition games against Division I schools. The Gators will play University of Nevada, Reno on Nov. 5, San Jose State on Nov. 8 and Santa Clara University on Nov. 20.

Though the team has its holes to patch, players said the key to success this season will lie within its strong defense and offensive output.

“Everybody’s new so we have to build that chemistry, but  the difference between last year’s team and this year’s team is we have tons of shooters who can score,” sophomore forward Brianna Harden said. “If we can do that and play good defense, we should be able to (win).”