Comedic play brings humor to Day of the Dead celebrations 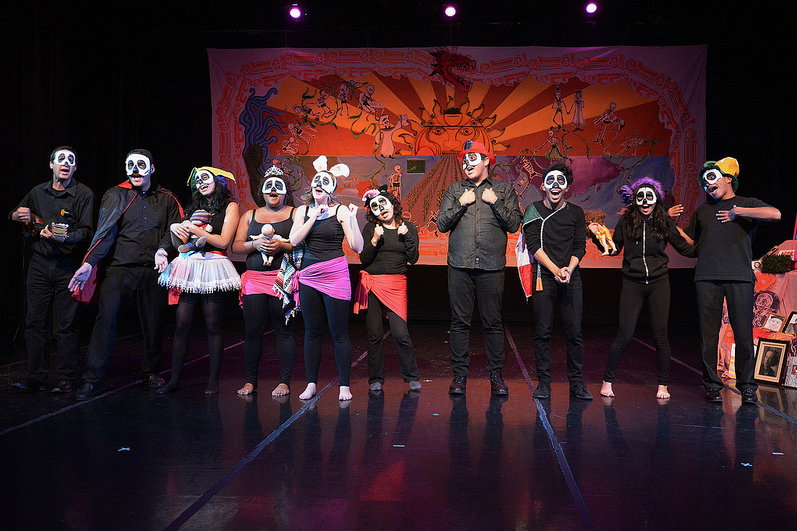 “The Still Life Cabaret,” a comedic play coupled with song and dance, highlights the significance of Día de los Muertos.

Written and directed by SF State professor Carlos Baron, the play focuses on a group of children who have passed away and return to their homes on the day of the dead to catch a glimpse of their relatives. This year, the team presented the show over the course of three days, Nov. 1 for the “Day of the Innocent”, Nov. 2 for the “Day of Dead Children” and Nov. 3 for the “Day of the Dead.”

“Connecting with the ancestors in an active and collective way has been part of the pre-European tradition for many years,” Baron said. “The celebrations of the dead among us today are more festive and inviting of the ancestors and the living, food is set up in the altars for the spirits, fire crackers are sent up to the sky to signal the route for the spirits, crying is frowned upon, because it makes the road slippery for the dead that are making their way to visit us.”

Carlos Baron presents a play every year for the Latino/Latina Teatro Workshop and the Multicultural Theatre at SF State and uses funds from the Instructionally Related Activities Funds to produce an original script specifically for Day of the Dead.

This year, Baron covered modern topics directly connected with the Mission District and used the play to pay tribute to José Montoya, a local Bay Area activist and poet who recently passed away.

“You’re encompassing a very traditional ritual, that is celebrating Dia de los Muertos,” said Albert Tobias, a mathematics major at SF State and actor and make-up artist for the play. “But at the same time you’re layering current issues that affect the Latino community such as gentrification and deportations.”

Participating actors, musicians and backstage crew this year ranged from math, political science, creative writing, theater and Latino/a studies students. Together they celebrated and educated others and themselves about a significant aspect of the Latino community.

“Somebody told me about the play and I personally wanted to get out of my comfort zone,” said grad student José Héctor Cadena, another actor who played the part of ‘The Hipster” in “Still Life Cabaret.” “It has been an experience full of growth, I enjoyed it a lot.”

Aside from students, Baron encourages local community artists to participate every year. This year, Baron invited Silvia Parra, a well-known Bay Area artist, to perform the role of “La Llorona.” The legendary North and South American character is most commonly known as “The Weeping Woman.”

“I love to work with students, especially with music and theater and I have been working with Carlos for this class for over 10 years,” Sánchez said.