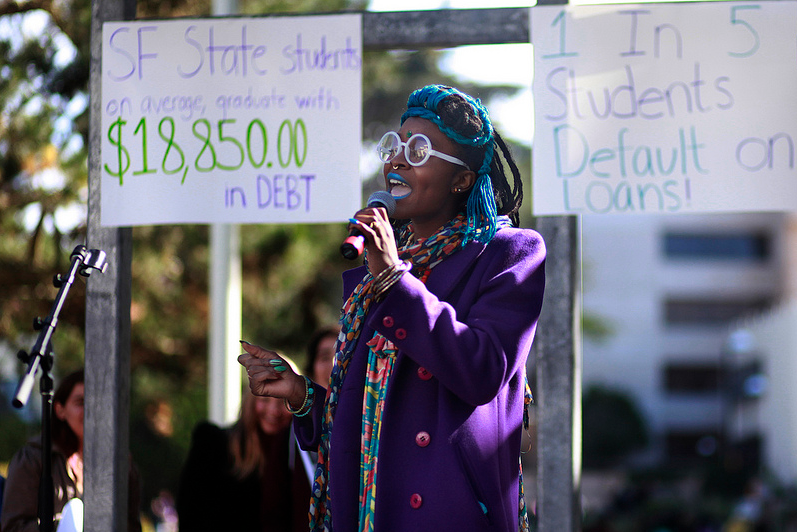 Equity Week, a 12-year-old national college campus event, attempts to draw attention to unfair circumstances in higher education for students, faculty and staff, focuses on the high cost of education and the work conditions for non-tenured instructors.

SF State’s event was in partnership with California Faculty Association (CFA), the Students for Quality Education (SQE), the Ethnic Studies Student Organization and Jobs with Justice.

“The event highlights the range of inequalities, and these issues are shared issues between the staff, faculty and students,” said President of CFA Lillian Tiaz. “They tell the students, ‘Well, we have to raise your fees because these professors want more money’ and then they tell the professors ‘The only way we can pay you more is to turn to the students and ask them for more money’,” she said.

Equity Week was first formed by a coalition of non-tenured instructors in 2001, but has now grown with partnerships with student organizations such as SQE and other labor groups.

The event, which drew a small crowd, focused on student debt and its approach to $1.2 trillion, according to the Consumer Financial Protection Bureau. Speakers emphasized the high interest rates charged to students for student loans.

“When Wall Street needed a bail-out, they were charged .7 percent on their loan, less than one percent, meanwhile, students are charged between 4 percent and 6.8 percent,” said Phil Klasky, one of the coordinators for the event, executive board member of SF State’s chapter of CFA and ethnic studies professor.

Student attendee Hanan Alshari, a 25-year-old chemistry major said the high cost of graduate school makes her think hard about going on to her masters.

“I thought I could save money by going to community college first, but I haven’t and with the high cost of summer school and no financial aid to pay for it, I’m delaying my graduation by one more semester,” Alshari said.