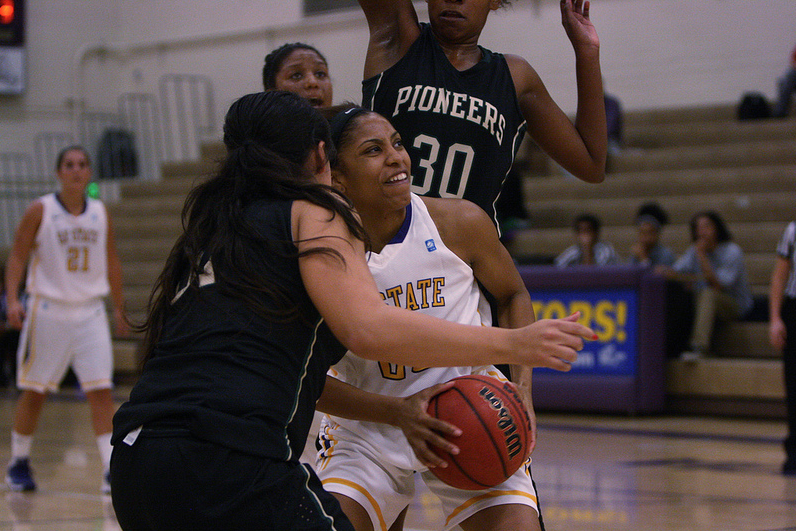 After a slow start to the season, the SF State women’s basketball team took its first lead of the year with seven minutes to go in the first half of the game Tuesday.

The Gators wouldn’t trail the rest of the game, besting Pacific Union 76-45 in the Gator’s home opener.

“Anytime you get a win, it’s a great win,” head coach Joaquin Wallace said.  “We have a goal in mind, to try and get to the tournament, so each time you get a win it puts you a step closer.”

The Gators’ trapping defense bothered Pacific Union all game, as they forced 29 turnovers, 17 came in the first half.

“That’s how we play, that’s how we play every game,” Wallace said.  “But we still sat back and let them make easy passes. We were able to do well, but we could have played a lot better.”

Senior transfer Katie Batlin paced the Gators with 18 points, 10 steals, six rebounds and five assists. Batlin had a rough start, committing six turnovers in the first half, but had only one in the second.

“Once the new half started, (I) stayed in the present,” Batlin said. “(I) looked to create for my teammates, and that gives me energy and confidence to go do my own thing on the court.”

Returning sophomore Brianna Harden had a career day with 17 points and 14 rebounds off the bench, and lead returning scorer Angela Van Sickel chipped in with 11 points.

The Gators led by only six at the end of the first half, as they couldn’t get out of their own way, committing 13 turnovers and managing only 24 points.

“It was sloppy play,” Wallace said. “You consider we played Reno and San Jose and we had less than 17 turnovers and that’s against higher level teams.”

SF State exploded for 52 points in the second half, pushing their lead to as high as 33.

“(This) gives our team a lot of confidence to just get after it the rest of the season,” Batlin said.  “There were things that we didn’t do well but there were a lot of things we did great. And everyone got an opportunity to get on the court and show their stuff so that was fun to start the season off like that.”

The Gators return with only four players from the team that finished in eighth place in the CCAA a year ago.

“It’s very important for (the returning players) to come out and set the tone,” Wallace said.  “But we have a pretty good bench too, and we have some good complimentary players.  That’s something we talk about, that every night it’s going to be a different person, because we do have that flexibility.”

The women’s basketball team looks to continue their upward trend as they have improved their record each of the past two years.