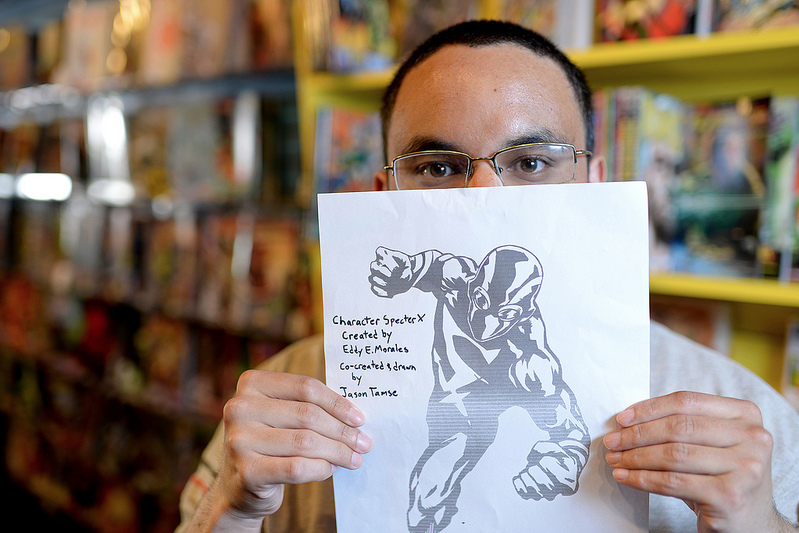 Eddy Enrique Morales, alumnus of SF State with a BA in drama, holds up a drawing of Specter X, a character he created and calls “San Francisco’s first and very own Latino superhero.” Morales aims to have his first comic, featuring Specter X, come out early 2014 with the help of funds he received through a fundraising website and the San Francisco community. Photo by Virginia Tieman / Xpress

The Phenomenal Specter X, a creation of a SF State graduate, vigilantly watches over San Franciscans and keeps citizens safe from villains.

Enrique Morales, a 2007 graduate from SF State with a bachelor’s degree in drama, is the creator of The Phenomenal Specter X, San Francisco’s first comic book superhero.

Morales, born and raised in San Francisco, watched Batman, Spider-Man and X-Men cartoons on television as a child but did not pick up a comic book until 2003. The inspiration for the character came from Morales’ own experience when he witnessed a man get hit and killed by a Muni train he was on.

“I’ve noticed for many years that SF doesn’t have its own superhero,” Morales said. “SF is a city that has so much culture. It would look great as a comic book.”

The Phenomenal Specter X’s story begins with Rick Alvarez, a normal 17-year-old Latino boy, born and raised in San Francisco, who is transformed into a superhero after he was struck by a Muni train, according to Morales. He gained the ability to fly, make himself invisible and pass through objects.

Morales wrote his first comic strip in 2005, titled “Living With Robots,” a commentary on human life and technology. It was published in the Xpress newspaper and by Bay Area Artists Unite, a community art group.

He was able to produce “Living With Robots” with help from Sterling Gee, a friend and graduate of California College of the Arts. Gee designed the artwork and lettering for “Living With Robots,” according to Gee. Gee is currently working with Morales on the Specter X comic as a letterer, arranging the text seen within the comic and adding in the speech bubbles.

Morales also works with local Bay Area artist Jason Tames, who attends the Academy of Art University, to create the first ten pages of The Phenomenal Specter X comic book which is set to be released in 2014.

“For Enrique’s comic I was asked to go for a Love and Rocket art style,” said Tames.

Love and Rocket refers to a popular ’80s alternative comic that provided a sleek and realistic art style, according to Morales.

Today, Morales continues to receive financial support for the creation of Specter X on his account with Go Fund Me, a fundraising website. Fellow comic book readers have generated nearly a quarter of his $4,500 goal.

Morales offers some advice for both artists and current students at SF State.