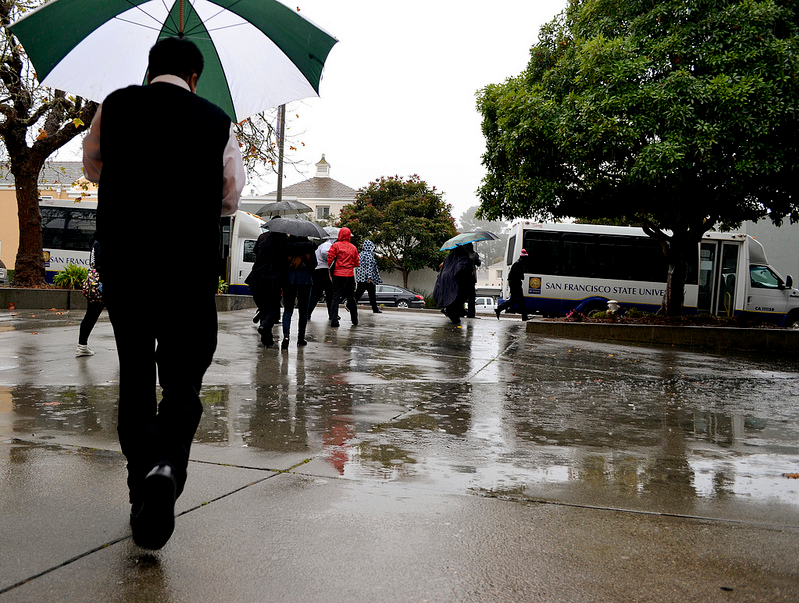 Last month, the University invested $83,000 to add two additional shuttles to the fleet that transports students from the Daly City BART station to campus, in order to accommodate the growing commuter population at SF State.

SF State’s shuttle service is available to students and faculty who commute from Daly City BART and runs Monday through Friday.

In addition to the five white “San Francisco State University” labeled shuttles, which can transport 26 seated passengers and six to eight standing or roughly 6,000 students a day, two new black shuttles have been added to the route to alleviate long lines for the shuttle that picks up at 19th Avenue and at the Daly City BART station, according to Deputy Chief of Police Reggie Parson.

“It’s quicker than last year,” said Justin Porter, a history major who commutes from Antioch four times a week. “Last year I’d have to wait 15 to 20 minutes; this year the longest has been ten minutes.”

The two new shuttles, provided by Bauer, a transportation agency, were added Nov. 6 for both the day and night shifts, according to Parson. Bauer shuttles are known for using alternative fuels such as compressed natural gas, biodiesel and propane, according to Bauer’s website.

The Division of Administration and Finance provides the funds for these additional shuttles which adds up to $83,000 total or $858 a day until the end of the Spring 2014 semester, according to Parson.

Along with the increase in transportation vehicles, the University has also moved the drop off and pick up point for the shuttle at Daly City BART to the bus stop near the 28 Muni bus line stop, in order to allow commuters to easily choose to either take the shuttle or Muni to campus.

However, students like Quan Lee, a nursing major who commutes from Oakland, believes the shuttle can be further improved.

“I had to wait 45 minutes this morning, it made me late to class,” Lee said. “There needs to be a lot more shuttles.”