Student designers get recognized in this year’s FNA winter show 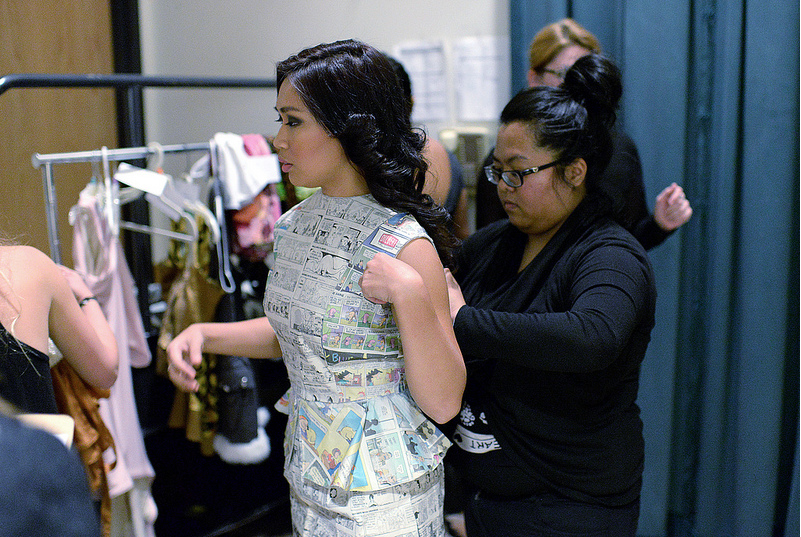 Kris Roberto, wearing a design in the Zero Waste Pledge portion of the show made by Maria Cabanban, changes clothes before walking the runway during the "Brilliance: The Gems of San Francisco State" fashion show in Jack Adams Hall at SF State Thursday, Dec. 5, 2013. Photo by Virginia Tieman / Xpress

About 40 models exhibited the works of 30 student designers shortly after 7:30 p.m. in Jack Adams Hall in the Cesar Chavez Student Center. A number of the student models were proudly wearing their own well-crafted designs.

“I love wearing something, which is amazingly made by one of my best friends, who I think has some major talent going on. So yes, I had a lot of fun,” said model Erin Mundy, who wore a silver body piece over a black dress designed by Laura Sallack, an apparel design and merchandising major at SF State.

The Fashion Network Association is an SF State organization that provides students and alumni with fashion industry knowledge through the creation, promotion and production of fashion events and publications. The FNA is comprised of members from a diverse group of students, many of whom are not fashion majors, but have backgrounds in business, journalism, marketing and so forth.

“Students of every major and year are part of the FNA and worked together to put on the show,” said Melissa Landeros, co-president of the FNA. “With big productions like this one there are bound to be challenges, and we overcame them but there is always room for improvement,” Landeros said. 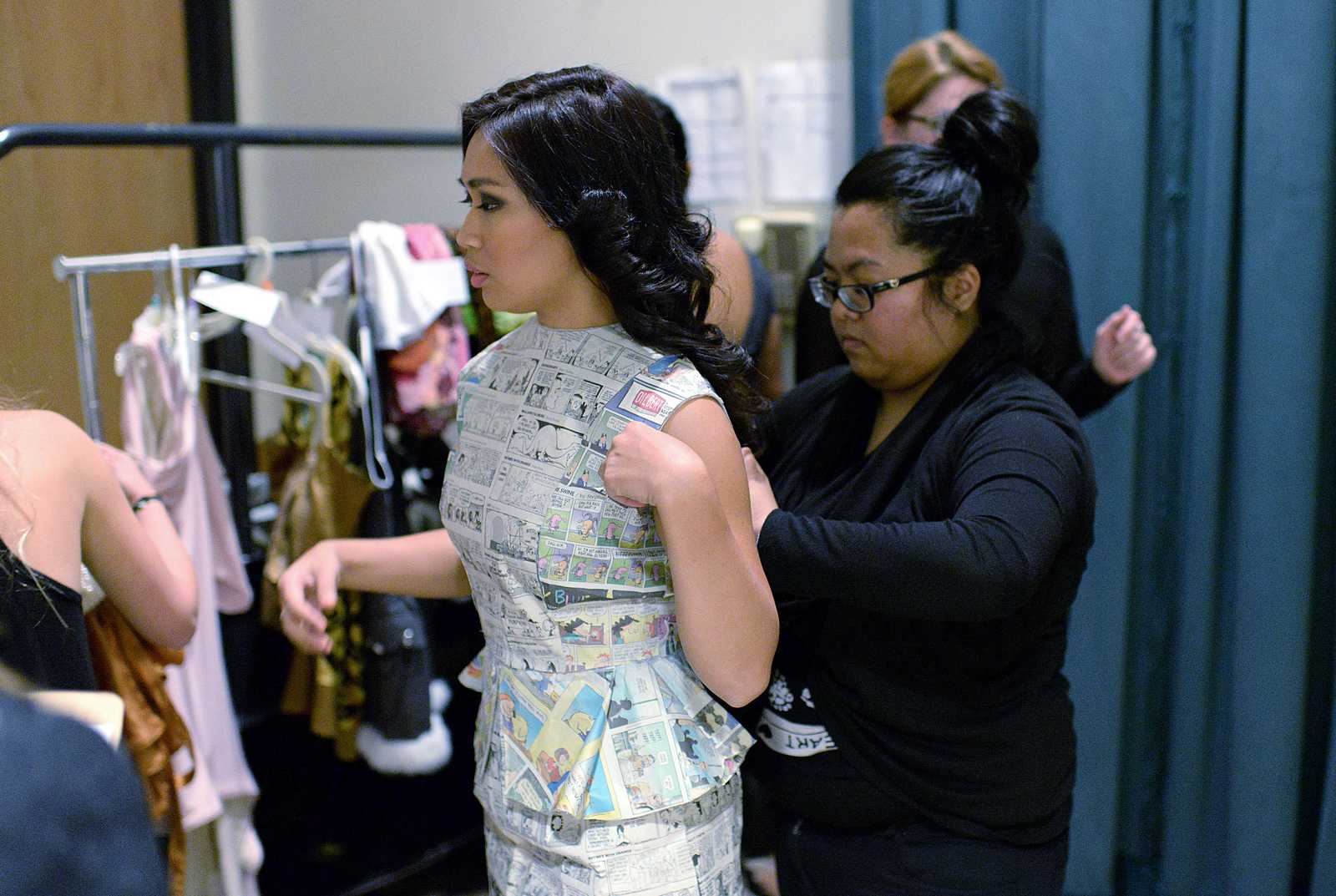 Kris Roberto, wearing a design in the Zero Waste Pledge portion of the show made by Maria Cabanban, changes clothes before walking the runway during the “Brilliance: The Gems of San Francisco State” fashion show in Jack Adams Hall at SF State Thursday, Dec. 5, 2013. Photo by Virginia Tieman / Xpress

The Winter Show kicked off with a panel discussion with guest speakers Julian Dash from Holy Stitch and Madhvi Pratt from Pashma. They highlighted the importance of student effort and initiative in fashion while SF State alumni Ashley Keno operated as their moderator.

“I really want to see manufacturing come back to San Francisco and the U.S.,” said Madhvi Pratt, co-founder of Pashma Cashmere, an international brand for pure cashmere scarves. “What I really want to see is San Francisco encouraging it (local manufacturing) more, this is the part I don’t see and it is so hard for young designers over here to make it and we don’t want that creativity to die because of lack of opportunity and economic challenges.”

Once the panel ended, the winners of Pashma’s design competition were announced. The first prize of $1500 was awarded to Maria Cabanban, an SF State student, and Clarissa Sangalang, from San Jose State University, who submitted their designs as a team for the competition. The competition opened to students in September.

“I was just really happy with what I saw on the runway today and some of my favorite outfits were designed by the students we had chosen for first place,” said Jackie Dutt, sales consultant and brand development for Pashma, and the main organizer of the design competition. “They’re not just great with the print designing but their craftsmanship was also very top notch.”

Aside from the excitement with meeting the honorable panelists, craziness took a whole new level backstage as models came back from exhibiting apparel designs on the runway. Most models were required to change well in advance of their next walk.

“We actually had to slow down the show a little bit in the middle because girls weren’t getting their outfits on fast enough,” said Macy Williams, who was part of the FNA merchandising committee and also coordinated the times for the models backstage during the show. “There was this line of perfectly prepared models and right next to them was all this craziness of girls just tearing their clothes off and putting them back on and making sure everyone is in order,” Williams said.

“Brilliance: The Gems of San Francisco State” had more sponsors than last year’s show, but the winter 2012 show had more models. However, according to Landeros, the names announced for the models was unique to the 2013 winter show.

The FNA is already planning its next event, the Spring 2014 show, that is expected to be held in the first week of May next year. It will feature the individual and group collections designed by ADM seniors.